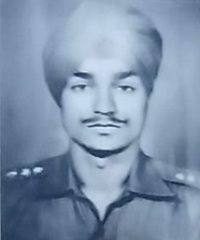 Place of birth : Lucknow (UP)

Capt Harjit Singh hailed from Lucknow in Uttar Pradesh and was born on 14 November 1943. Son of Late Sardarni Inderjit Kaur and Late Sardar Trilochan Singh, he joined the Army as a commissioned officer. He was commissioned as a second lieutenant into 10 Mahar battalion of the Mahar Regiment, an infantry Regiment, with a rich history of gallantry and numerous battle exploits. In the very early part of his service career, he got involved in the field operations as his unit got deployed on the western border as the war clouds stated gathering in 1965.

During Sep 1965 Capt Harjit Singh’s unit 10 Mahar was deployed in Jammu (RS Pura)-Sialkot border. Pakistan launched ‘Operation Gibraltar’ in Aug 1965, wherein thousands of infiltrators were sent across the border to carry out sabotage and subversion. Following the failure of Op Gibraltar, Pakistan invaded Chhamb district on 01 Sep 1965 triggering an aggressive response from the Indian forces. As part of ongoing operation in the that sector, 10 Mahar battalion was tasked to enter Pakistan and launch attacks on Muhadipur and Rang Pur Jattan villages in Sialkot sector. Capt Harjit Singh was functioning as Intelligence officer of the battalion and got involved in gathering information about enemy dispositions critical to planning a successful attack.

Eventually, 10 Mahar marched into Pakistan in the middle of the night on 21 Sep 1965 in a single-line formation. The soldiers were to form up about 100 yards in front of the designated target and launch a bayonet attack. However, as the battalion troops entered Pakistan, they were subjected to heavy artillery shelling. But the villages were deserted, and the Pakistani army had withdrawn. The battalion took up positions there along with a detachment of tanks in the front.  However, just a day before the declaration of ceasefire, Pakistan launched a well-planned and determined attack on the battalion positions on 22 Sep 1965.

The counter attack was very fierce supported by artillery and armour. Capt Harjit Singh quickly assessed the gravity of the situation and got down to coordinating various battalion detachments for effective response. He went about directing and inspiring his troops without caring for his own safety.  The battalion succeeded in beating back the counter attack successfully. However, Capt Harjit Singh while directing operations got hit by a RPG round injuring him seriously. He later succumbed to his injuries and was martyred. Capt Harjit Singh was a gallant soldier and a gritty officer who laid down his life at the age of 22 years in the line of his duty.  He was given the award, "Mention-in-Despatches"  for his dauntless courage, fighting spirit, devotion to duty and supreme sacrifice.