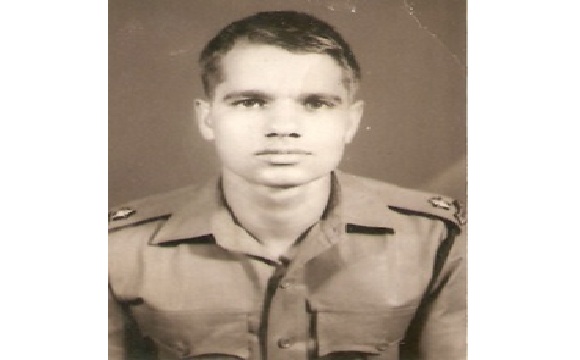 Captain Giri Raj Singh hailed from Haryana and was born in 1940s. Son of Shri Choudhary Man Singh and Smt Reshmi Devi, he had a brother Ajit Singh as his sibling. After completing his education he got selected to join the Army as a commissioned officer. He was commissioned into the 5 Assam Battalion of the Assam Regiment, an Infantry Regiment with a rich history of gallantry and battle honours.

By the year 1971, he had been promoted to the rank of Captain and had gathered experience of serving in various challenging operational areas. In the later part of 1971 when the war clouds appeared on the horizon his unit got deployed on the western front.

The Indo-Pak war of 1971 officially commenced on 03 Dec 1971 when the Pakistani Air Force attacked various airfields of the IAF. Within hours after the air attack, Pakistan’s 23 Division opened Artillery fire with all its nine Regiments along a 30-40 Kms front in the Chhamb sector. Soon thereafter a well-coordinated attack with armour was launched on the 191 Brigade, which was the only Brigade of 10 Division of Indian Army defending the area west of the Munawar Tawi river at that time. 5 Assam was part of the 191 Brigade and was given the task of blunting the Pakistani attack.  Capt Giri Raj Singh’s company was occupying a key position for the defence of Chhamb, when the enemy launched an attack on the night of 04 December 1971.

The attack continued throughout that night and thereafter for sixteen hours but Capt Giri Raj Singh and his troops held on gallantly and thwarted the enemy’s advance. However as the position was of strategic importance to the enemy, it launched another battalion attack on the 5th morning, preceded by heavy artillery fire. Capt Giri Raj Singh led his soldiers in repulsing the attack forcefully. However, after this operation, Capt Giri Raj Singh was not traceable. He is believed to have been captured and taken prisoner, as his body was never found.