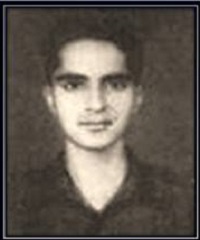 Captain Gautam Mubayi was born on 2nd of January 1943, at Lahore in Pakistan. Son of Shri S Mubayi, Capt Gautam had joined the Army on 23 Sept 1963, at the age of twenty years. He was commissioned into 2 Dogra of the famed Dogra Regiment, a regiment known for its valiant soldiers and numerous battle honours. During 1965, Capt Gautam’s unit was deployed in J & K in Mendhar sector.

On 01 Sep 1965, Pakistan invaded Chamb district, triggering the war and a series of operations and counter operations. On 20 Sep 1965, the UN security council adopted a resolution for a cease fire which came into effect on 23 Sep at 3:30 am. Though the war had ended officially, the skirmishes still went on. In Mendhar sector of J & K, the Pakistani forces encroached upon the Indian territory after the cease fire. The occupied feature was strategically important  and a plan was made by Indian forces to take over the feature from the enemy. 2 Dogra unit deployed in that sector was tasked to take over the possession of the feature.

On the night of 2 Nov 1965, the troops of 2 Dogra swung into action as per the operational plan. The enemy after encroaching upon the feature had fortified it with strong defences. Capt Gautam Mubayi was commanding a platoon of the Company that was spearheading the attack. The assaulting Company met with stiff resistance from the enemy forces and was unable to advance. When the company was held up due to intensive enemy fire, Capt Mubayi volunteered to breakthrough with his platoon to establish a bridgehead. A bridgehead was required to be established, if the Company had to move forward towards the assigned objective.

But the enemy forces had laid mines and had deployed enough troops to thwart any attempt to recapture the feature. Notwithstanding the risk involved , Capt Mubayi crawled forward cutting the wire himself and led his platoon forward through the minefields. He got wounded severely in the leg by a mine but unmindful of his injury, kept moving forward. Finally Capt Mubayi through his courageous action succeeded in establishing a bridgehead. However Capt Mubayi later succumbed to his injuries and was martyred at the age of 22 years. Capt Mubayi showed indomitable courage, inspiring leadership and made the supreme sacrifice in the best traditions of the Indian Army.

Capt Gautam Mubayi was given the nation’s second highest gallantry award, “Maha Vir Chakra” for his outstanding bravery, unyielding fighting spirit, and sacrifice during the operation.

On the night of 2 November 1965 a company of Dogra Regiment in which Captain G. Mubayi was commanding a platoon in the Mendhar Sector, J&K, was ordered to take possession of a strongly defended feature which notwithstanding the ceasefire had been encroached upon by Pakistani force. When the company was held up due to intensive enemy fire, Captain Mubayi volunteered to breakthrough with his platoon to establish a bridgehead. He crawled forward , cut the wire himself and led his platoon forward through the mine fields. He was wounded severely in the leg by a mine but unmindful of his injury, he kept moving forward. By this bold action, he established a bridgehead. Captain Mubayi showed indomitable courage and inspiring leadership and made the supreme sacrifice in the best traditions of the Indian Army.