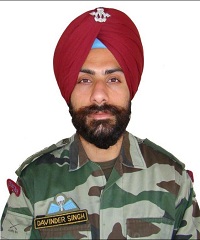 Place of Birth: Ghaziabad, UP

Captain Devinder Singh Jass was born on 29 September 1983, in Ghaziabad, Uttar Pradesh. Son of Sri Bhupinder Singh Jass and Smt Dalbir Kaur, Capt Jass as a young boy was energetic and helpful, who always dreamt of serving in the Armed Forces. He was good in academics too and went on to do his engineering from GLA University in Mathura and then completed his MBA from IIIT Allahabad in 2007. Capt Jass even secured a lucrative job in an MNC but opted to follow his dream and joined the Indian Military Academy.

Captain Jass was trained at the Indian Military Academy in Dehradun for a year and was then commissioned as a Lieutenant in the Corps of Signals in 2008. Capt Jass was a soldier at heart and loved an adventurous life, so decided to volunteer for Special Forces. After the grueling selection process and training, Capt Jass was inducted into the elite 1 Parachute Regiment in January 2009. The soldiers of 1 Para(SF) are known for their gallantry and daredevil commando operations in very challenging situations. Capt Jass was happy to be part of this elite force and was later posted to Kupwara in J & K in November 2009.

On 22 Feb 2010, the security forces had received information from the intelligence sources about the presence of militants in Chinkipora village in Sopore district in J & K. It was decided to launch a search and destroy operation to nab the hardcore militants and the task was assigned to 1 Para(SF) unit.  Capt Devinder Singh Jass was chosen to lead the operation along with his troops. Capt Jass swung into action and launched the operation in the wee hours of 23 Feb 2010. The militants were hiding in a residential building in the suspected area, which was cordoned off in a well-planned move.

On being challenged the militants opened fire at the troops and a fierce gun battle ensued. At 4.45 AM the assault team led by Capt Jass decided to storm the suspected building. The militants had anticipated this action and had positioned themselves at vantage points inside the building. They were heavily armed and were sizable in numbers. When Capt Jass and his troops stormed the building and moved forward to open the door, they were attacked from various directions, with militants using automatic weapons and hand grenades. A heavy exchange of fire followed and Capt Jass managed to kill two militants in a daring action.

However, during the gun battle, Capt Jass got seriously injured and later succumbed to his injuries. Capt Jass displayed outstanding courage and leadership during the operation and laid down his life in the service of the nation. Capt Jass was given the nation’s second highest peace time gallantry award, “Kirti Chakra” for his exceptional grit, determination, unfaltering leadership and supreme sacrifice.