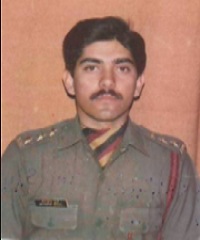 Captain Devashish Sharma hailed form the state of Madhya Pradesh and was the only son born to Shri Jitendra Kumar Sharma and Smt Nirmala Sharma. His father Jitendra Kumar Sharma, who was a poet as well as author, had served as Kendriya Vidyalaya Principal. Capt Devashish Sharma did his primary education at Visakhapatnam and Pachmarhi and also completed his first year of B Sc. course at the Hansraj College, Delhi. It was in Pachmarhi wherein , by watching Army parade, he was inspired to join the Armed Forces. It was also his mother Smt Nirmala Sharma’s desire to see her son as a doctor as she could not become one.  Subsequently, following his dream, aided by his mother’s wish he got selected for the prestigious Armed Forces Medical College (AFMC).

After completing his course in medicine from AFMC he was commissioned into the Army in the Army medical corps (AMC) in 1992. On completing his training, Capt Devashish was posted to the Garhwal Rifles Regiment’s 10th Battalion on January 22, 1993. While serving with 10 Garhwal Rifles, Capt Devashish proved his mettle as a soldier and a doctor and was awarded the Chief of the Army Staff’s Commendation.

Capt Devashish was fond of singing English pop and played the violin too. He had even joined a music group and performed in Mumbai. Capt Devashish was also a good swimmer and represented his state, Madhya Pradesh in swimming. while at the AFMC. On January 12, 1994, he was transferred to the 26 Punjab, deployed in J&K for counter-insurgency operations.

During 1994, Capt Devashish was serving with 26 Punjab Battalion as the Regimental Medical Officer (RMO). Based on the information received from the intelligent sources about the presence of the militants, 26 Punjab launched an operation on 10th Dec 1994. The assault team of the unit reached the suspected area in Dangarpur village of Kashmir valley and launched the search and cordon operation. Capt Devashish was part of the operation to provide medical aid in case of medical emergencies.

The militants hiding in the village house opened fire at the troops after being surrounded and challenged. A fierce gun battle followed thereafter with a heavy exchange of fire. During the cross firing, many soldiers of the unit got injured and Capt Devashish rushed forward to provide medical aid to them. However, Capt Devashish too got hit on his left thigh and started bleeding profusely. Unnerved, Capt Devashish who had also undergone Commando training in Lucknow, shot at the fleeing militant. Though wounded severely Capt Devashish refused to be evacuated and continued giving Medical treatment to other wounded soldiers.

He was later evacuated by Air to the base hospital, but succumbed to his injuries and was martyred. He displayed courage and devotion to duty of a very high order following the highest traditions of the Indian Army. Capt Devashish was given the nation’s second highest peacetime gallantry award, “Kirti Chakra”, for his outstanding bravery, determination and supreme sacrifice. Capt Devashish Sharma also achieved the distinction of becoming the first officer from the Army Medical Corps to receive the gallantry award, “Kirti Chakra”.

The Citation of Kirti Chakra awarded to him reads:

On 10th Dec 1994, MR-06368 Capt Devashish Sharma, was serving as Regimental Medical Officer, 26th Batallion of  the Punjab Regiment. During cordon and search operations in Dangarpur village (J&K), he shot a fleeing militant and continued to render medical aid to soldiers in his care, despite being fatally wounded. In recognition of his exceptional act of bravery and devotion to duty. Capt Devashish Sharma was awarded the second highest peacetime gallantry award- Kirti Chakra posthumously on 26th Jan 1995. He became the first AMC officer to receive the coveted “KIRTI CHAKRA”.

“The courage and spirit of self-sacrifice displayed by Devashish is now a source of inspiration to young officers of the AMC. His name is spoken of with awe and a sense of pride… His name will be entered in the Roll of Honour in the AMC Centre, Lucknow.”

“As a brave soldier, he also displayed exemplary courage in killing the terrorist in spite of having sustained serious injuries. Devashish gave his life for the sake of the nation, a noble death for any soldier and a doctor,”