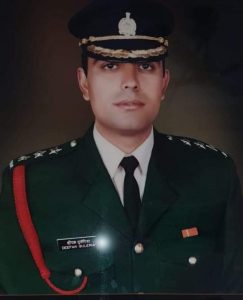 Captain Deepak Guleria  was born on 9 Mar 1968 in Ajmer in Rajasthan and hailed from Cholthara in Sarkaghat subdivision of Mandi district in Himachal Pradesh. Son of Mr M L Guleria, a former DIG (CRPF), Capt Guleria completed his schooling from Kendriya Vidyalaya. Later he graduated from Layola College, Chennai and got selected to join the Army. He joined Officers’ Training Academy (OTA) in Chennai in May 1991 and completed his training in Mar 1992. He was commissioned into the Army Service Corps, the corps that carries out the logistic supply function in the Army.

Capt Guleria was an avid  sportsman and excelled in various games including lawn tennis, table tennis and basketball. He represented his unit in various sports and won laurels in many sports events both at the Services as well as national levels. Capt Guleria also had the distinction of leading a joint service car rally from Dwarka to New Delhi in Dec 1997 as part of the Golden Jubilee celebrations of India’s Independence. Capt Guleria got married to Poonam, daughter of an IAF officer Wg Cdr HL Ratta in Dec 1994. When Capt Guleria was serving in the army HQ TPT Company, they were blessed with a son, Dhruv on 08 Apr 1998.

During 1999, Capt Guleria was serving with 3 RR battalion deployed in J & K. As Operation Vijay was launched in June 1999, there was an increase in counter-insurgency operations and the troops of his battalion had to maintain a very high state of alert at all times.  Capt Guleria was functioning as staff captain to 3RR Sector HQ and was closely involved with all operations of the battalion. On 18 Jun 1999, the militants engineered an IED blast on the Srinagar-Kargil highway injuring many soldiers and civilians. Capt Guleria, rising to the occasion responded immediately and swung into action with his troops.

Capt Deepak Guleria was given the gallantry award, “Sena Medal” for his commendable courage, leadership, comradeship and supreme sacrifice. He is survived by his wife  Smt Poonam Guleria and son Dhruv Guleria.

“It isn’t life that matters. It is the courage you bring to it.” : Mrs Poonam Guleria (Wife of Capt Deepak Guleria)

The Himachal Pradesh government has named a school in Cholthara in Mandi district as “Shaheed Captain Deepak Guleria Govt High School” in his honour.