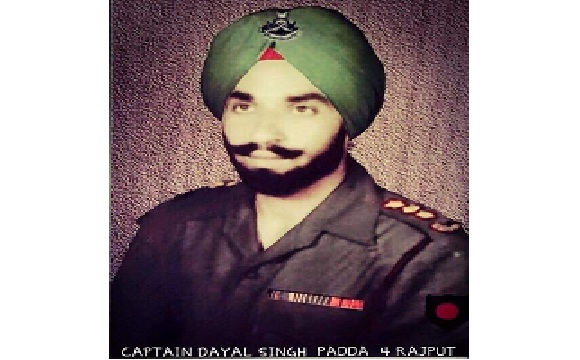 Captain Dayal Singh Padda was born in 1931 in the village Bule Nangal in Amritsar district of Punjab. He studied at King George College, Jalandhar Cantt and subsequently joined the Army. He was commissioned into 4 Rajput battalion of the famed Rajput Regiment, an infantry Regiment known for its intrepid soldiers and numerous battle exploits. He soon developed into a tough soldier and fine officer, who commanded respect of his seniors and juniors as well. Besides being a committed soldier, he was a keen sportsman and excelled in athletics. He proved to be an outstanding athlete and went on to win several awards in 'high jump' at the national level. He also won five medals in various inter-command army athletics competitions.

After getting commissioned he served in various operational areas and later took part in "Operation Polo" in the liberation of Goa in Dec 1961. He also became part of Indian Contingent in UN Peacekeeping Mission to Gaza in 1961.  During 1962, Capt Dayal Singh's unit 4 Rajput was sent to NEFA.

The Indo-China war had reached its peak when Capt Dayal Singh's unit 4th Rajput battalion was sent to NEFA from Belgaum. At that time Major Trilok Nath was officiating as CO and was told that it was assigned to 65th Brigade under Brigadier GM Saeed. The battalion was assigned to capture the left flank of the Division covering the approach from Orka La-Punsum la however the “C” Company of the battalion was made responsible to protect the headquarter of 4th Infantry Division. Soon Lt Col Brahmanand Avasthy, who was serving as an Instructor in the Infantry School at Mhow was chosen to take over as Commanding Officer of the battalion.

After the ambush of around 200 soldiers of 1, 2 and 4 Sikh LI under 65 Infantry Brigade, a decision was taken to withdraw from Sela. With 62 Infantry Brigade falling back from Sela, Lt Col Avasthy the Commanding officer of 4 Rajput, decided to defend Bridge 1 to allow the brigade and remnants from 4th Division to retreat. However, 62 Inf Brigade never returned and the remaining soldiers filtered through some other routes. Finally, Lt Col Avasthy pulled back to Lubrang destroying any stores that could not be carried back. From there he moved to Phudung joined by various stragglers, many of them wounded and had to be carried. On 23 Nov 1962, Capt Dayal Singh who was in Sela- Bomdila sector along with his troops, was asked to return to base after the cease fire came into effect. However as Capt Dayal Singh and his men were on their way, they were attacked by the Chinese forces.

Rising to the occasion, Capt Dayal Singh quickly organized his troops tactically and engaged the enemy forces. Leading from the front, he grabbed a bren gun and fired at the enemy till the ammunition ran out. He kept motivating his troops to repulse the attack and ran back and forth from the rear to the firing line. He engaged the enemy with grenades and kept fetching the ammunition from the rear, whenever it ran out. However while doing so, he was hit in the waist and was severely injured. However he soon succumbed to his injuries and was martyred.  Capt Dayal Singh Padda was a valiant soldier and a fine officer who laid down his life at the age of 31 years in the service of the nation.