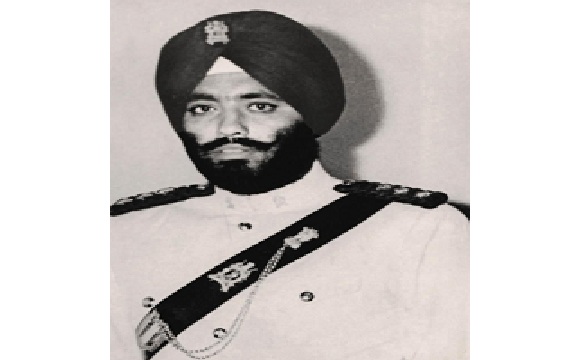 Capt Daljinder Singh hailed from New Delhi and was born on 30 May 1945. The only son of an Army veteran Col Gurbaksh Singh and Smt Avinash Kaur. He did his schooling at the well known Lawrence School, Sanawar (Himachal Pradesh) and at the RIMC Dehradun where the foundation of his future military career was laid. He knew his calling right from his younger age and had made up his mind to follow in the footsteps of his father, an artillery officer in the Army. Following his passion, he consequently joined NDA in July 1962 at the age of 17 years. He passed out of the academy in December 1965 and went to the Indian Military Academy at Dehradun for further training.
He passed out of the IMA in December 1966 and was commissioned as a 2nd Lt into the Armoured Corps. In January 1967 he joined 9 Horse also known as 'The Deccan Horse' in Ferozepore as a young dashing subaltern who went through the grind of being a tank driver, then a gunner and a radio operator before being made a troop leader in Bravo Squadron (Jats). He was known to most of his friends as "Dallu" and was a strapping six feet two inches two hundred pounder, who lived life king size. He was a fun loving person and being serious was not part of his nature. He had keen interest in sports and excelled in basketball and golf besides other games.
After successfully completing the Radio instructors course at Ahmednagar, Capt Daljinder was posted as an instructor at Radio Wing at AC Centre and School in early 1970. In late October 1971 when the war clouds gathered over the horizon, Capt Daljinder Singh got posted back to to the Regiment. In March 1971 his unit had replaced 8 Cav as the Divisional Regiment Armd Corps of 10 Inf Div, which was operationally responsible for the Akhnoor Sector ( J & K ). On joining the Regt he was appointed as 2 I C Brovo squadron where he had earlier served as a troop leader and a short stint as second in command.
Battle of Chhamb (Indo-Pak War) : 04 Dec 1971
During 1971 war, Capt Daljinder Singh's 9 Horse Regt was deployed in the western sector to thwart the advance of Pakistani forces. The Regiment was part of 10 Infantry Division of  15 Corps deployed in the Chhamb sector of J & K. In 1965, the Pakistanis had succeeded in capturing Chhamb with a surprise attack and in 1971 too, it was their one of the main objectives. 10 Inf Div, under Major General Jaswant Singh, was deployed for the offensive and was fairly well-equipped, having four infantry brigades, two regiments of armour (9 Horse and 72 Armoured Regiment), two Engineer regiments, six regiments of artillery (two medium, three field and one light), besides elements of air defence and the usual ancillary units.
Prior to the outbreak of hostilities,191 Inf Bde and Alfa Sqn were deployed west of the Munawar ( River ), in the Chhamb salient , while the rest of 10 Inf Div was deployed East of the Tawi. The overall plan of the Division was to launch a limited offensive through the Chhamb salient . On the night of 3rd / 4th December as the balance of the division was in the process of moving into the forward posture for a subsequent limited offensive there was intense Pakistani shelling all along the front and depth areas. This was followed by multiple attacks on the Forward Defended Localities of 191 Inf Bde by enemy infantry supported by tanks. The enemy was following the same strategy as was adopted in the 1965 war, an Inf Div and an Armd Bde as part of a Corps offensive .
In light of the prevailing situation in the Chhamb salient , in the early hours of 4th December, Bravo Squadron was inducted across the Munawar Tawi to augment Alfa Squadron. Around 0700 hours soon after it’s induction B Sqn came under intense enemy tank and artillery fire. In the ensuing skirmish Capt Daljinder’s tank sustained a direct hit by an artillery shell and he suffered fatal shrapnel wounds. Capt Daljinder Singh succumbed to his injuries and was martyred. Capt Daljinder Singh was a valiant soldier and a fine officer who led from the front during the operation following the motto of the Regiment, "संघे शक्ति" (Sanghe Shakti) meaning "In Association, there is Strength". He laid down his life in the service of the nation following the highest traditions of the Deccan Horse Regiment and the Indian Army.
Capt Daljinder Singh is survived by his sister Smt Hareena (Neelu) Daulet Singh and nephews Shri Zorawar Daulet Singh and Shri Bikkrama Daulet Singh.