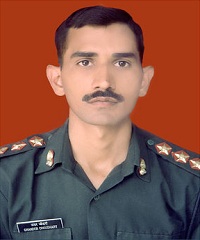 Captain Chander Choudhary Sihag hailed from Beegawas Ramsara village in Dungargarh tehsil of Bikaner district in Rajasthan and was born on 16 October 1971. Son of Dr K L Sihag and Smt Sundar Devi, Capt Choudhary had a brother and a sister as his siblings. He studied from ‘Our Lady of Nazareth High School’ Mumbai and Mithibai college Mumbai and later from Osmania University Hyderabad. He graduated in commerce stream in 1996 and later got selected to join the ‘Officers’ Training Academy’ Chennai after passing the Combined Defence Services Examination. In the year 1998, he got commissioned into 4 Grenadiers of the famed “The Grenadiers ” an infantry Regiment well known for its gallant soldiers and a long history of battle honours.

Capt Choudhary got married to Ms Sharda on 21 May 1997 and the couple had a son named Siddharth. After passing out from the Officers Training Academy in Sep 1999, as a young Lieutenant, he got posted to his unit which was deployed in Poonch sector of J & K.  By that time, though the Kargil war had ended, the LOC was very volatile and active with frequent cease fire violations from across the border. As his unit was deployed along the LOC in Poonch sector, the young Lt Choudhary got involved in the field operations very early in his service career.  Later in the year 2000, he was promoted to the rank of of Captain.

During July 2002, Capt Chander Choudhary’s battalion moved to Mahore tehsil in Udhampur district of J & K for Counter Insurgency operations. Owing to the leadership qualities and gallant actions during various operations Capt Chander Choudhary was given the command of  a Ghatak Platoon which specialized in counter insurgency operations. He had also undergone commando training at Belgaum earlier.

On the night of 08/09 Sep 2002, during a Seek and Destroy operation, Capt Chander Choudhary received information from intelligence sources about the presence of some hard core terrorists inside a maize field in Dubri village in Udhampur district.  Capt Choudhary  immediately, rushed with his Ghatak Platoon and cordoned off the suspected area. After intensive search Capt Choudhary and his troops spotted the terrorists and engaged them in well coordinated move. They managed to kill six terrorists, in quick succession but the threat was far from over as the exact number of terrorists was not known.

In a surprise move one of the remaining terrorists jumped from behind a boulder and fired at the troops indiscriminately. Capt Choudhary rose to the occasion and retaliated in a swift action to eliminate the terrorist. However Capt Choudhary too received gun shots during the gun battle and was seriously injured. While being evacuated by air Capt Choudhary however succumbed to his injuries and was martyred. Capt Chander Choudhary displayed exceptional courage and unyielding fighting spirit during the operation which was a fine example of leadership and would remain a source of inspiration for his battalion. Capt Chander Choudhary was a valiant and committed soldier who laid down his life in the service of the nation.