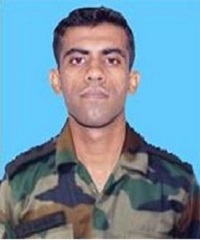 Captain Ayush Yadav hailed from Kanpur in Uttar Pradesh. Son of Sri Arun Kant Yadav and Smt Sarla Yadav, Capt Ayush had one elder sister Rupal as his sibling. Son of a UP Police Inspector, Capt Ayush always wanted to serve in the Armed Forces since his childhood. He continued to follow his dream and eventually got selected to join the Army after passing the Combined Defence Services Examination (CDS). He went on to join the 134th course at Indian Military Academy on 30th Dec 2012.

Capt Ayush got commissioned into the Regiment of Artillery and was proud to be a gunner. During 2017, he was serving with 310 Med Regt which was deployed in Kupwara sector of J & K. Capt Ayush was a keen boxer and had won many competitions during his school days. He was a committed soldier and a fine officer, who was equally liked by his seniors and men under him.

During 2017, Capt Ayush Yadav’s unit was based in the Army garrison located at Panzgam in Kupwara district, about 120 km from Srinagar. Kupwara is one of the most frequented infiltration routes used by militants to cross the Line of Control, especially after the snow starts melting  On 27 Apr 2017, three armed militants descended down the wooded mountains and tip-toed towards the Army garrison at Panzgam at 4.30 am. They hurled grenades and started indiscriminate firing after cutting through two barbed wire fences from the rear side of the camp. When they began cutting the fence, soldiers on duty noticed the suspicious activity and challenged them. The three militants taken by surprise fired at the guards and tried to rush towards the living quarters.

Capt Ayush Yadav was a valiant soldier and an officer par excellence who laid down his life in the service of the nation. He is survived by his father Shri Arun Kant Yadav, mother Smt Sarla Yadav and sister Rupal Yadav.