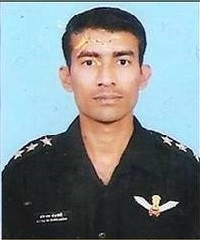 Captain Avinash Yashwant Somvanshi hailed from Borgaon village in Solapur district of Maharashtra. Son of Shri Yashwant Somvanshi and Smt Janeshwari, Captain Avinash studied in Akluj till Class X and then went to Aurangabad to prepare for the National Defence Academy entrance examination. An alumnus of 114th course of the NDA, he got commissioned into the 12 Dogra regiment in 2009 after training at the Indian Military Academy in Dehradun. Flying was his passion, so later he got selected for the flying training and was transferred to the Army Aviation Corps.

During 2104, Capt Somvanshi was serving with 39 (Independent) Recce and Observations Flight under the Army base in Bareilly. On 01 Oct 2014, Capt Somvanshi was tasked for a recce mission near Indo-China border in Munsiyari, Pithoragarh along with Maj Abhijay Thapa and Maj Varyani. The crew took off in their Cheetah Helicopter and carried out the assigned task as per the operational plan.

However, while returning from their mission the captain experienced rotor failure and the snag developed into a serious emergency situation. The aircraft had logged approximately sixty minutes of flying time till then. Capt Somvanshi realized that the aircraft was flying over the thickly populated area of Bhartol village and the army base of 54 Engineer Regiment. He quickly assessed the situation and came to the conclusion that the measures needed to be taken to minimize the casualties on the ground. Capt Somvanshi having promptly identified the emergency and along with his captain, Maj Thapa decided to maneuver the crippled aircraft away from the inhabited area.

In the limited time available, Capt Somvanshi transmitted a distress call to the air traffic control tower and also cut off the fuel supply to the engine in order to minimize the collateral damage. Capt Somvanshi then helped his captain Maj Abhijai to successfully divert the aircraft despite the tremendous damage suffered in order to save the lives of over 11000 residents of Bhartol village and his other brethren in uniform from 54 Engineer Regiment. The aircraft then crashed away from the populated area and Capt Somvanshi and his crew members could not survive the crash and were martyred. Capt Somvanshi was 26 years old and had got married to Sonali just four months back.  Capt Somvanshi was posthumously awarded  ” Sena Medal” for his outstanding service and supreme sacrifice.