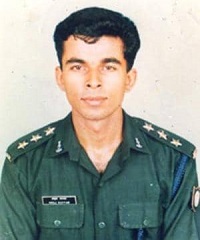 Capt Anuj Nayyar was born on 28 Aug 1975 in Delhi and also grew up there. His father, S K Nayyar, worked as a visiting professor in Delhi School of Economics while his mother, Meena Nayyar, worked for the South Campus library of Delhi University. Capt Nayyar finished his schooling from Army Public School, New Delhi and belonged to the 1993 batch. He was a bright student who consistently performed well in academics as well as sports. He graduated from the National Defence Academy (90th course, Echo Squadron) and later was commissioned into the 17th Battalion of the Jat Regiment in June 1997.

During 1999, Capt Anuj Nayyar’s unit was deployed in J & K along the LOC. In 1999, the Indian Army detected a massive infiltration by the Pakistani military and paramilitary forces in the Kargil region of Jammu and Kashmir. The army quickly mobilized its forces to drive out the Pakistani infiltrators from Indian territory. Capt Nayyar, a junior commander in the 17 Jat Regiment, was one of the more than 500,000 Indian troops deployed in the region. His first major operation involved securing Pt. 4875, also known as Pimple II, a strategic mountain peak on the western side of Tiger Hill which was occupied by Pakistani infiltrators. Due to its strategic location, securing Pt. 4875 was a top priority for the Indian Army. The peak, which stood at 15,990 feet above sea level, had extremely steep slopes. The eviction of Pakistani regulars from Pt 4875 in Kargil was crucial if Tiger Hill had to be recaptured. Capt Nayyar’s Charlie Company was given the task to secure the peak without waiting for any aerial support on  07 July 1999.

During the initial phase of the assault on Pt. 4875, Capt Nayyar’s company commander Maj Ritesh Sharma got injured and was evacuated. Capt Nayyar who had been promoted to the Captain’s rank during the Kargil war itself, took over as the company commander. After the initial setback, the assault team split into two groups, one led by Capt Vikram Batra and other by Capt Nayyar. The Pakistani infiltrators had constructed several bunkers on Pt. 4875 and Capt Nayyar’s team, which consisted of 7 personnel, located 4 enemy bunkers. The company began to ascend Pt. 4875 during which it came under heavy artillery and mortar fire from Pakistani infiltrators. However, the troops counter-attacked, which also included hand-to-hand combat, forcing the Pakistani soldiers to retreat. During the battle, Capt Nayyar killed 9 Pakistani soldiers and destroyed three medium machine gun bunkers.

Under Captain Nayyar’s leadership, the company had successfully cleared three of the four bunkers and began its assault on the last remaining bunker. While clearing the fourth bunker, an enemy rocket-propelled grenade directly hit Capt Nayyar. Despite being grievously injured, Capt Nayyar continued to lead the remaining men in his company. He succumbed to his injuries but not before clearing the last bunker on Pt. 4875. None of the soldiers from Capt Nayyar’s team of Charlie Company survived the battle. Two days after Pt. 4875 was secured, it was counter-attacked by Pakistani infiltrators during which the second team of the Charlie Company, led by Capt Batra, successfully defended the peak. The securing of the Pimple Complex area paved the way for the recapture of Tiger Hill which finally forced Pakistan to retreat its forces to pre-conflict positions.

Capt Nayyar showed extreme courage and grit in the face of the enemy while leading from the front in dire circumstances. His courage and leadership was an inspiration to his troops. He had such a deep impact on his troop members that Tejbir Singh, a fellow soldier of the Jat Regiment, named his son Anuj in honour of Capt Anuj Nayyar. Capt Anuj Nayyar was given the nation’s second highest gallantry award, ” Maha Vir Chakra” for his exceptional courage, unyielding fighting spirit, and supreme sacrifice.

On 06 July 1999, Charlie Company was tasked to capture an objective, which was a part of the Pimple Complex on the Western Slopes of Point 4875, in the Mushkoh Valley. At the beginning of the attack the Company Commander got injured and the command of the company devolved on Captain Anuj Nayyar. Captain Nayyar continued to command his leading platoon into the attack under heavy enemy artillery and mortar fire. As the platoon advanced, the leading section reported location of 3 to 4 enemy positions. Captain Nayyar moved forward towards the first enemy position and fired rocket launcher and lobbed grenades into it.

Thereafter, the section, along with Captain Nayyar, physically assaulted and cleared the position. The enemy, which was well entrenched, brought heavy volume of automatic fire. Captain Anuj Nayyar, unmindful of his personal safety, motivated his men and cleared two more enemy positions. While clearing the fourth position an enemy rocket propelled grenade hit the officer killing him on the spot. This action led by Captain Anuj Nayyar resulted in killing nine enemy soldiers and destruction of three medium machine gun positions of the enemy. The success of this operation after a brief setback was largely due to the outstanding personal bravery and exemplary junior leadership of this daring officer. Captain Anuj Nayyar displayed indomitable resolve, grit and determination and motivated his command by personal example acting beyond the call of duty and made the supreme sacrifice in true traditions of the Indian Army.