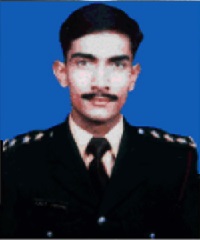 Captain Amit Verma was born on 31 August 1976 in Amritsar, Punjab to Colonel S Verma and Mrs Kusum Verma. An academically gifted child, Capt Verma started his schooling at the Army Public School in Delhi, continuing the same in KV INS Hamla and went on to graduate from Symbiosis College, Pune in Maharashtra. On his selection to the Indian Army, Capt Verma joined the Indian Military Academy at Dehradun in June 1997. An only son to his parents, Capt Verma was a 4th generation army officer in the family. Both his grandfather, a retired major, and father, a retired colonel, had participated in wars and Capt Amit Verma, carried forward that tradition by being part of the Kargil war.

From the start, Capt Varma was an all-rounder, excelling not only academically but also proving to be the best in various extracurricular activities like sports, quiz, and dramatics. Kind-hearted, obedient, helpful and straight-forward, he was loved and liked by all his friends. His biology teacher from school, Mrs. Arlene Gracious, fondly remembers him to be “a naughty, but adventurous kid who would go to the grounds behind the Military hospital to practice ropes”. Mrs Verma, Captain’s mother recounts his early days and how behind all those childish tricks was a boy who loved her. During his stay at the boarding school, Capt Verma would often collect the soil from the tree (in an ice-cream box) where his mother would sometimes sit while visiting him. He would then keep that box next to himself as a remembrance of his mother’s fragrance. This soft-hearted boy was to grow into a tough and battle hardened soldier.

With his academic records and sharp mind, Capt Verma could have chosen any field of professional career, but his heart lay in the service of the country. Having grown in a military family, the life of discipline and valour was his calling. He was commissioned into 9 Mahar of the famed Mahar Regiment of Indian Army in December 1998 and on 1st January 1999 reported for duty with the battalion at Leh.

Turtuk in the Nubra tehsil of Leh district of Jammu and Kashmir is located about 205 km from the Leh district headquarters on the banks of the Shyok River. It is the only Balti region under the Indian administration and was under Pakistan’s control until 1971, after which India gained control over this area. Following the UN-mediated ceasefire in the 1949, the line between India and Pakistan was demarcated up to point NJ9842 at the foot of the Siachen Glacier. The largely inaccessible terrain beyond this point was not demarcated, but delimited as thence north to the glaciers in the Karachi Agreement. Later, in the Simla Agreement of July 1972, the ceasefire line was converted into the “Line of Control” extending from the “Chhamb sector on the international border [to] the Turtuk-Partapur sector in the north.” Thus Turtuk held great significance for the Indian Army as it was an important gateway to Siachen Glacier.

It was May 03, 1999 when intrusion by Pakistan in Jammu and Kashmir’s Leh district was reported to Indian security forces by local shepherds. The tensions escalated thereafter and the Indian Army launched “Op Vijay” to dislodge the Pakistani forces. Capt Amit Verma’s unit, 9 Mahar was part of 102 Independent Infantry Brigade under 3 Infantry Division. His unit was redeployed in the Tiger Hill area to take part in operations along with other combat elements. with his battalion. On 04 July 1999, Capt Amit Verma was tasked to survey the area and hold a post at 15500 ft along with six of his fellow soldiers.