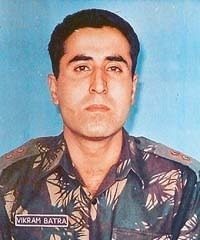 Captain Vikram Batra was born on 9th September 1974 and hailed from Bandla Gaon in Palampur district of Himachal Pradesh. Son of Shri Girdhari Lal Batra and Smt Kamal Kanta, Capt Vikram Batra received his primary education from D.A.V Public School, Palampur and then completed his senior secondary education from Kendriya Vidyalaya Palampur. After passing his second PU in 1992, he got admitted in D.A.V College in Chandigarh. While in college Capt Batra joined NCC and was awarded the best NCC Cadet (Air Wing) in the North Zone.

Right from his younger days, he was fearless and bold and ever-ready to offer help to anyone in need. His helping nature coupled with pleasing manners made him likable to anyone who came in contact with him. Besides being good in academics, he took keen interest in sports too and specially excelled in table tennis. While growing up he was greatly influenced by the inspirational stories of the “Param Vir Chakra” awardees. As a young boy he would watch the TV serial “Param Vir Chakra” regularly and thereafter often discuss in detail their stories of courage and gallantry with his brother. Though he got selected to join the Merchant Navy, he knew his calling and had made up his mind to follow his dream of donning the Army uniform.

Consequently he got through the Combined Defence Services Examination and got selected to join the Indian Military Academy, Dehradun in 1994. He joined the Jessore Company of Manekshaw Battalion and was commissioned into 13 JAK Rifles, an infantry Regiment well known for its intrepid soldiers and numerous battle exploits.  After being commissioned, he got posted to Sopore in Baramulla district of J&K as his first assignment. By April 1999, his unit had completed its field tenure  and was preparing to move to its peace location. But the detection of large scale intrusion by the Pakistani forces in Kargil sector in early May 1999 changed the operational scenario and the unit’s move to its peace location was cancelled.

As part of Op Vijay, then Lt Vikram Batra’s unit 13 JAK Rif got deployed in Drass area of Kargil in June 1999 under the operational command of 56 Infantry Brigade. After the capture of Tololing Top in Drass by 2 Raj Rif battalion, 13 JAK Rif was given the responsibility of capturing another militarily significant feature called Point 5140. This peak was one of the most treacherous and crucial peaks in Drass region and was heavily defended by the enemy forces. The Delta Company led by Lt Vikram Batra and Bravo Company led by Lt Sanjeev Singh Jamwal were assigned this task of capturing the Point 5140 in a daring night attack.

Preceded by heavy bombardment by Indian Artillery on enemy positions, the two companies began their movement towards the objective. The two companies were attacking from different directions to surprise the enemy however the climb was steeper in case of the Delta Company led by Lt Vikram Batra.  At a height of 17,000 feet, Lt Vikram Batra and his men planned to approach the hill from the rear, to achieve the crucial element of surprise. Against all odds, they ascended the rocky cliff but as they neared the top, the Pakistani defenders pinned them on the face of the cliff with machine gun fire. Undeterred by this, Lt Batra and five of his men climbed up and after reaching the top lobbed two grenades at the machine gun posts. Lt Batra alone killed three soldiers in close combat and despite being badly injured during the exchange, he regrouped his men and continued the mission.

Lt Batra’s courage inspired his men to fight valiantly and eventually the Point 5140 was captured. At 4:35 am on 20 Jun 1999, Lt Batra sent the radio message, “Chanakya …it’s Shershah reporting!! We’ve captured the post! Yeh Dil Maange More” , which later on became the catch-line for the Kargil War. The victory paved the way for a string of victories at Point 5100, Point 4700, Junction Peak and ‘Three Pimples’.

After the capture of Point 5140, 13 JAK Rif was de-inducted from Drass to Ghumri to rest and move for the next operation. The battalion was then moved to Mushkoh valley and the next task assigned was the capture of Point 4875. Lt Batra had been promoted to the rank of Capt by then based on his earlier exploits in Drass. Capt Batra and his 25 men from Delta Company commenced the attack on the night of 06 July 1999. The plan was to reach the ridge, storm the enemy and occupy the post by the first light on 07 July. But unfortunately the evacuation of one of the officers, Capt Navin Nagappa, who had a badly injured leg, took some time and they were still short of the target by first light.

Just before the objective, there was a narrow ledge manned by the enemy soldiers and it was almost impossible to advance specially in daylight. However Capt Batra  decided that even though it was daylight he and his comrades would attempt a direct assault. In a rare show of extraordinary courage and daredevilry Capt Batra assaulted the ledge and took the enemy by surprise. However during the exchange of fire Capt Batra got injured but he continued his charge with support fire from rest of his men and reached the mouth of the ledge. Having got a foothold on the ledge as he was planning his next move, he noticed one of his young soldiers lying in a pool of blood few feet away. He decided to move the injured soldier to safety along with his JCO Sub Raghunath Singh. But as he tried to do so he was hit by a sniper fire in the chest. He breathed his last, uttering the words, “Durga Mata Ki Jai” meaning “Victory to Goddess Durga”, the battle-cry of his Regiment. Spurred by Capt Batra’s extreme courage and supreme sacrifice, his men attacked through the ledge and fighting like men possessed achieved the objective.

Capt Batra’s bravery, camaraderie and devotion to his duty were extraordinary and would find exalted place in the annals of our military history. Capt Vikram Batra was given the nation’s highest gallantry award, “Param Vir Chakra” posthumously for his outstanding courage, steadfast resolve, leadership, and supreme sacrifice. Capt Vikram Batra is survived by his father Shri Girdhari Lal Batra, mother Smt Kamal Kanta and his twin brother Shri Vishal Batra.

The citation for the ‘Param Vir Chakra’ awarded to him reads:

In Dras Sector, the enemy held strong fortified positions, heavily reinforced with automatic weapons, with treacherous approaches dominating Srinagar-Leh Road, the lifeline of supplies to Leh. On 20 June 1999, Captain Vikram Batra, Commander Delta Company, was tasked to attack point 5140 during Operation Vijay. Captain Vikram Batra, with his company, skirted around the feature from the East and maintaining surprise reached within the assaulting distance. The officer reorganized his column and motivated his men to physically assault the enemy positions. Leading his men from the front, the officer in a daredevil assault pounced on the enemy and killed four intruders in a hand-to-hand fight.

On 7 July 1999, in yet another operation in the area of Point 4875,  the company of the officer was tasked to clear a narrow feature with sharp cuttings on either side and heavily fortified enemy defences, that covered the only approach to it. In order to speed up the operation, the officer decided to assault the enemy positions along a narrow ridge. Leading the assault, he engaged the enemy in a fierce hand-to-hand fight and killed five enemy soldiers at point blank range. In this action, Captain Batra sustained grievous injuries. Despite the serious injuries, he crawled towards the enemy and hurled grenades clearing the position. Leading from the front he rallied his men and pressed on the attack and achieved a near impossible military task in the face of heavy enemy fire with utter disregard for personal safety. The officer, however, succumbed to his injuries. Inspired by this display of extraordinary junior leadership, the troops fell upon the enemy with vengeance and annihilated them, finally capturing Point 4875.

Captain Vikram Batra, thus, displayed the most conspicuous personal bravery and junior leadership of the highest order in the face of the enemy and made the supreme sacrifice in the highest traditions of the Army.