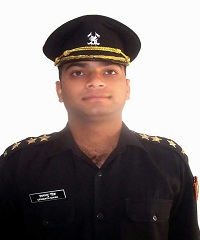 Capt Upmanyu Singh hailed from Gwalior in Madhya Pradesh and was born on 08th Feb 1982. Capt Upmanyu completed his schooling from Gwalior and later on graduated from the city’s Science College. He was a keen sportsman and had special interest in badminton and cricket. Being an adventure enthusiast he had a strong inclination towards the armed forces right from his younger days. Eventually, he got selected to join the army through Combined Defence Services Examination in the year-2005 at the age of 23 years. He got commissioned into the Armoured Corps, the elite combat arm of the Indian army.

After serving for a couple of years, Capt Upmanyu Singh got married to Ms. Monika in 26 Dec 2009. His first assignment after completing his training was at Pathankot and later he got posted to the trouble-torn J&K area. After serving for few years with his parent unit, Capt Upmanyu was deputed to serve with 22 RR Bn deployed in J&K for counter-insurgency operations.

During Dec 2010, Capt Upmanyu Singh’s unit 22 RR bn was deployed at Sopore in north Kashmir’s Baramulla district. The battalion troops were called upon to undertake operations against the militants on a regular basis as the area of its operation was affected by large scale militant activities. One such operation was undertaken by the unit on 07th Dec 2010, based on the inputs from the intelligence sources.  Capt Upmanyu was tasked to lead that operation in  Sopore’s Model town area.

Capt Upmanyu Singh reached the suspected area along with his troops and launched a search and cordon operation. Soon the troops made contact with the militants and decided to tighten the cordon. One terrorist was found to be holed up in a house. Capt Upmanyu decided to flush out the terrorist and deployed his soldiers accordingly. Capt Upmanyu leading from the front moved forward to engage the terrorist. However, in the ensuing gun battle, Capt Upmanyu received gunshots and was seriously injured. He later succumbed to his injuries and was martyred. Capt Upmanyu was a valiant soldier and a fine officer who led from the front like a good military leader. He laid down his life at the age of 28 years in the service of the nation following the highest traditions of the Indian army. Capt Upmanyu Singh was given the gallantry award ” Sena Medal” for his bravery, commitment, devotion to duty and supreme sacrifice.