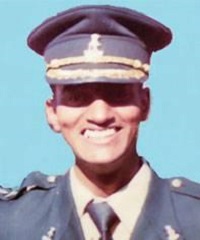 Captain Umang Bhardwaj was born on 24 March 1977 in a military family to  Col Kunwar Bhardwaj and Smt Shiksha Bhardwaj belonging to Garauli village in Gurgaon district of Haryana. Besides his father Capt Umang’s military family also included his elder brother, Maj Rakesh Bhardwaj, who is also following the family tradition of serving in the Army.

Capt Umang was always passionate about Army life and had a dream of donning military uniform like his father. He pursued his dream and joined the army and was commissioned into 7 Jat of the famed Jat Regiment  as an officer. A graduate from the University of Delhi, Capt Umang had also done a Business and Management course from Wigan and Leigh in England.

During 2002, Capt Umang’s unit was deployed in Poonch sector of J & K for anti insurgency operations. When Capt Umang had resumed his duty after a brief holiday ,on the midnight of November 18, his unit got a tip-off that militants were preparing to sneak into the Valley along Rajouri-Poonch sector near the Line of Control that night. A decision was taken to engage the militants in a search and destroy operation. Capt Umang was tasked along with a team to lead the assault on the infiltrators.

Capt Umang swung into action and led an assault along with members of his team. In the bloody encounter, Capt Umang liquidated six of the militants on the spot. The seventh and the final militant of the group tried to play hide and seek, but was eventually shot down in an encounter that lasted till the early hours of the next morning. During the operation, a volley of bullets hit Capt Umang, wounding him in the chest and thigh. He later succumbed to his injuries and was martyred on 19 Nov. Capt Umang was barely 25 years old when he displayed his exceptional bravery and made the supreme sacrifice. For his unflinching courage and leadership of very high order Capt Umang was awarded “Shaurya Chakra” posthumously.

Captain Umang Bhardwaj was serving as the Ghatak Platoon Commander and Adjutant in ‘Operation Rakshak’ and ‘Operation Parakram’ on the Line of Control in Jammu & Kashmir.

On the night of 18/19 November 2002, when in an ambush he noticed terrorist approach the site, he held fire till they were as close as 10 meters and himself sprung the ambush killing the leading terrorist instantly. While the other terrorist took position and engaged own ambush, one terrorist tried to escape down into the nala. Captain  Bhardwaj unmindful of grave danger to him, rose from cover and ran parallel to that terrorist but in the process laid down his life.

Tribute by family members:   “Umang” you live in our hearts. We miss your smile, cheer and guts. The void remains and pride continues to shadow our pain. We salute your supreme sacrifice! Love n miss u lots……Mom, Dad. Savita, Rajesh and all Family members.