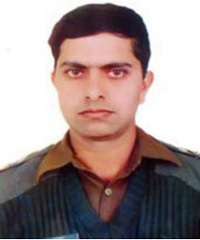 Captain Tarun Kumar hailed from Dehradun in Uttarakhand was born on 6th of March, 1969. Son of an army veteran Lt Col VK Trihima  and Smt Bindoo Trihima, Capt Tarun followed  into the footsteps of his father and joined the army. He was commissioned into 157 AD Regt of the Corps of Army Air Defence, the important combat support arm of Indian Army.  After serving for few years with his unit, Captain Tarun Kumar was deputed to serve with 4 RR Batallion in 1998.

During 1998, Capt Tarun Kumar was serving with 4 Rashtriya Rifles unit, deployed in J&K for counter-insurgency operations.  The area of responsibility (AOR) of the unit fell in Kupwara district which was a terrorist infested area and offered challenging situations on a regular basis. On 9th of August 1998, the unit received information from the intelligence sources about the presence of some hard core terrorists in the area under its control. A decision was taken to launch a search and destroy operation to deal with the dreaded terrorists.

Capt Tarun Kumar was part of the team that spearheaded the operation. The team surrounded the suspected area and soon spotted the terrorists, who opened fire at the soldiers on being challenged. A fierce gun battle ensued thereafter  lasting several hours. Capt Tarun and his team displaying superior field-craft skills succeeded in eliminating a number of terrorists. However, during this heavy exchange of fire Capt Tarun Kumar got severely injured and later succumbed to his injuries. During the operation Capt Tarun Kumar displayed outstanding courage and made the supreme sacrifice in the service of the nation. Capt Tarun Kumar was given the nation’s third highest gallantry award “Shaurya Chakra” for his bravery, unyielding fighting spirit and supreme sacrifice.