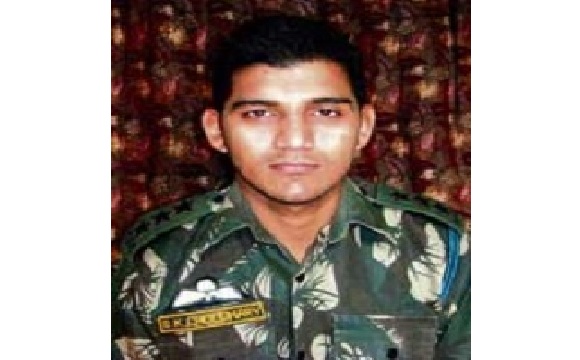 Captain Sunil Kumar Choudhary was born in Govindsar village near Kathua on 22 June 1980 in a military family to Mrs Satya Choudhary and Lt Col PL Choudhary. He hailed from Shaheed Joginder Nagar in Kathua district of Jammu & Kashmir and was eldest among his three brothers. Lovingly called “Soni” by his family and friends, Capt Sunil did his schooling from Kendriya Vidyalayas across the country wherever his father was posted. Later he completed his graduation from Garware College of Commerce, Pune and post-graduation from Garhwal University. Capt Sunil was a keen sportsman and excelled in football, boxing and swimming during his student days. He even took part in junior national level competition in swimming (Free Style & back Stroke) and Diving.

While pursuing MBA (Marketing) from Pune University, Capt Sunil would often visit his younger brother, Ankur, who was undergoing his training at NDA. There was a statue of Captain Manoj Kumar Pandey in NDA, who was posthumously awarded India’s highest military honour, Param Vir Chakra. Capt Sunil was deeply influenced by the inspirational story of Capt Manoj Kumar Pandey and decided to join the Army even before completing his MBA course. He passed the CDS examination and joined  Indian Military Academy on 01 July 2003.

Capt Sunil passed out from IMA on 10 Dec 2004 and was commissioned into 11 Gorkha Rifles. As a first assignment, he joined Platoon 7/11 Gorkha Rifles at Fort William Kolkata. He did exceedingly well in all his military training courses including the Commando (Officers) course before he moved to Counter-Insurgency Operation Area in Assam in May 2006. Within a span of one month of his taking over the “A” Coy of his new unit, he killed two top commanders of ULFA cadre.  His fearless and assertive anti-terrorist actions in the area caused great damage to ULFA cadre in that area. He figured in the hit list of ULFA and two unsuccessful attempts were made on his life by the ULFA militants.

On 26 Jan 2008, Captain Sunil was awarded, the “Sena Medal” in recognition of his outstanding gallantry during an operation against ULFA terrorists at Naopather village in Tinsukia district of Assam. On 27 Jan 2008, Captain Sunil was supposed to attend a Lunch Party at his CO’s (Col Parmeet Saxena) house at Dinjan to celebrate the award of Sena Medal along with Lt Varun Rathore of 19 Punjab. While on his way, Capt Sunil was tasked to carry out an operation based on information received from the intelligence sources about the presence of  7 to 9 ULFA terrorists in the village Rangagarh. Capt Sunil immediately left for the operation along with Lt Varun Rathore and five Jawans and reached village Rangagarh at about 1240 hours. Capt Sunil sent Lt Varun Rathore and three Jawans towards the right side of the village to cordon off the area. When the cordon was being laid, the terrorists hiding inside a house started firing indiscriminately and ran towards the surrounding jungle to escape. Capt Sunil swung into action and killed one terrorist while chasing them.

Despite being fired upon by the fleeing terrorists, Capt Sunil led the chase from the front like a true military leader In the ensuing firefight, Capt Sunil sustained grievous bullet injury in the left side of his chest. However, not caring for his injury he shot and injured the second terrorist. Despite being injured and profusely bleeding, he chased the third terrorist who had entered the forest. Capt Sunil outflanked the terrorist, cutting off his escape route and suddenly came to face to face with the terrorist. An intense firefight ensued thereafter at extremely close range. Capt Sunil, despite his critical condition, in one final glorious superhuman effort, shot and killed the terrorist. Capt Sunil later succumbed to his injuries and was martyred barely 24 hours after he was awarded, Sena Medal.

Captain Sunil was awarded ‘Sena Medal’ (Gallantry) for his outstanding leadership and repeated acts of gallantry on 26 Jan 2008 (Republic Day).