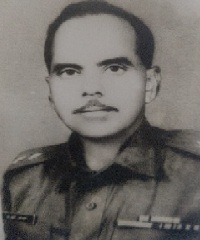 Hony Capt Sube Singh was born on 15 January 1925 and belonged to a Zamindar family of western Uttar Pradesh. He was inclined to join the Armed Forces since his younger days and eventually joined the Indian Army in 1943 at the age of 18 years.  He was recruited into Bengal Sappers (Bengal Engineers Group), one of the combat engineers group of the Corps of Engineers, a combat support arm of Indian Army. He got the opportunity to take part in active operations in the early part of his service career as his unit was sent to Burma front and Malaya as a part Allied Forces in WW-II.
After the independence, he had the distinction of participating in the wars of 1947-48, 1962  and 1965. He was a keen sportsman and excelled in many of the outdoor games including hockey. He also captained the Field Hockey tournament against Britishers in Malaysia. He became a coach and manager of Bengal Sappers and helped his teams to achieve many laurels in National Games. He was a deep rooted soldier at heart and motivated many young boys to join the armed forces. In recognition of his long meritorious service, he was given the rank of Honorary Captain. After retirement, he joined a spiritual group Sahaj Marg and rose to the level of *Preceptor* and established around half a dozen centers in NCR Delhi. He motivated and led hundreds of men, women and children to learn positive life practices to achieve their life goals. Hony Capt Sube Singh remained a true soldier in his life and often would say, “Once a soldier always a soldier”.
Hony Capt Sube Singh left for his heavenly abode on 14th March 2009 at the age of 84.