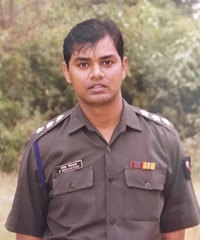 Capt Somesh Shrivastava was born on 23 Sept 1971 in Samastipur district of Bihar. Son of  Shri Madan Lal, Capt Somesh was the youngest amongst six siblings – eldest brother Suresh, followed by sisters Usha, Kiran, Vibha and Abha. Being the youngest and the apple of everyone’s eye, Capt Somesh was a loving and caring child, who won everyone’s heart with his smile and cheerful disposition. He completed his schooling from Loyola High School, Patna and Intermediate from Saint Columbus College Hazaribagh. Born in a family of Engineers, with his father Shri Madan Lal, an eminent engineer who retired as the Chief Engineer of Bihar State Electricity board, it was expected that Capt Somesh will follow his father’s footsteps and become an engineer. However, from a very early age, Capt Somesh was motivated to join the Indian Army and serve the nation. However, respecting his family’s wishes, Capt Somesh went on to pursue Civil Engineering from Maharashtra Institute of Technology, Pune.

After completion of his civil engineering, Capt Somesh followed his childhood dream of joining the army with determination and saw it to fruition when he joined the Indian Military Academy Dehradun in the year 1994. After completing his rigorous training, he was commissioned in June 1996 into the Corps of Engineers and joined the prestigious 15 Engineer Regiment which was stationed at that time under Eastern Command. After serving for a couple of years, Capt Somesh also fulfilled his long time wish of marrying his fiance Riya whom he had met during his training at Dehradun in October 1999.

During Mar 2001, Capt Somesh was serving in the Ladakh area while on deputation to (BRO) Border Roads Organization. He had joined as a platoon commander with the organization in the year-1999. Before coming to the BRO, Capt Somesh had picked up the ropes of a challenging Army career during his tenure in disturbed and difficult terrains of North East. He had earned the respect of both his senior officers and subordinates through his honesty, hard work and sincere devotion towards his service. During 2001, Capt Somesh was stationed at Ladakh, as a platoon commander responsible for building and upkeep of roads in the sector. His unit was part of Border Roads Organization’s mission of supporting the Armed Forces in their operations by building and maintaining road infrastructure in border areas. In the Ladakh region, besides Srinagar- Leh (NH-1D) Highway, Manali-Leh road played a very important role in providing road connectivity to the army units deployed in that region. As operations during the Kargil War were concentrated along the NH-1D, the access through Manali-Leh road was all the more crucial. Capt Somesh played an active role in opening alternative Manali- Leh road access during the Kargil war.

As the border roads in Ladakh were prone to landslides and often got blocked due to heavy snowfall, the BRO units often undertook snow clearance operations under very risky conditions. Capt Somesh was assigned the task of leading one such operation on the 4th of March 2001. The operation entailed a great amount of risk and demanded courage and professional skill of a very high order. Capt Somesh knew about the criticality of the operation and was committed to complete the assigned task. However, while supervising the snow clearance operation, Capt Somesh’s vehicle which was moving on an icy patch, skidded down the slope resulting in a horrific accident. Capt Somesh thus laid down his life in the line of his duty. In his short lifespan, Capt Somesh touched the lives of people around him and gave his utmost to his ‘First Love’ i.e. Indian Army. His courage and valor have been an inspiration to many who knew him including his wife – Riya Shrivastava who chose to put her sorrows behind and followed his footsteps. Riya joined the Indian Army and was commissioned into the Army Ordnance Corps in 2002. Capt Somesh Shrivastava was a committed soldier and a fine officer who made the supreme sacrifice at the age of 29-years following the highest traditions of the Indian army.