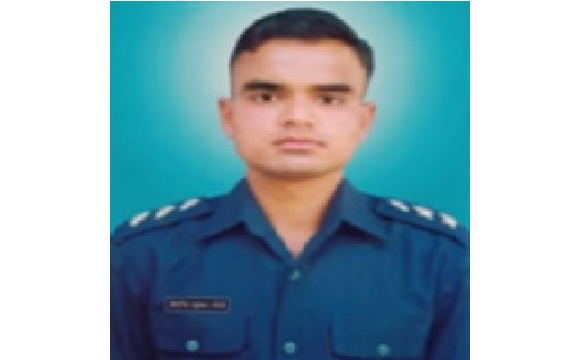 Capt Shreyans Kumar Gandhi was born on 30th April, 1976 and hailed from Raipur in Chhattisgarh. Son of Shri V. K. Gandhi and Mrs Premlata Devi,  in Raipur, Capt Shreyans grew up in a joint family. Since his father was serving as the Superintending Engineer in Water Resources Department, Capt Shreyans studied from various schools of Madhya Pradesh which included Saraswati Shishu Mandir at Rewa, Satna and Gwalior. Later he pursued his graduation and post graduation from MVM College, Bhopal. He was passionate about the Armed Forces since his younger days, so during his college, besides studying Military Science as one of his his subjects, he also earned his ‘A’,’B’ and ‘C’ certificates of NCC.

He was adept in studies and also carried adventure, kindness and courage in his veins. As a person he was always helpful, sensitive, and concerned. Once during a practice at the Lal Parade ground, Capt Shreyans found a wallet on the road containing a sum of three thousand rupees. His friend Sharad advised him to deposit the wallet at the police station, but Capt Shreyans was determined to personally deliver the wallet to its owner. He found a booking chit in the wallet and contacted the gas agency and finally found the address of the owner. Despite the heavy downpour that day he went all the way to Bairagarh to return the wallet.

His dream came true when he got through Combined Defence Services Examination and got selected to join the IMA Dehradun. After undergoing training at IMA, he was commissioned into 53rd Engineer Regiment of the Corps of Engineers , one of the oldest arms of Indian Army. He got posted to his unit in Bhatinda as his first assignment. later in 2001 Capt Shreyans got posted to Rajasthan border.

During 2003, Capt Shreyans's unit was deployed along the western border of Rajasthan. As the AOR(Area of Responsibility) of the unit was very close to the IB, the troops had to maintain a very strict vigil at all times. Also the area had many mines laid during the Operation Parakram. Capt Shreyans's unit was involved in mine clearance operations on a regular basis. On 7th January, 2003, Capt Shreyans was tasked with one such operation in Ranjeetpura village falling in the AOR of the unit.

Capt Shreyans knew that the mission was dangerous owing to its location on the sand dune with its characteristic of shifting sands. After meticulous search and confirming the presence of the mine with a prodder, he removed the dry grass. The mine which had been lying there for long could have become sensitive and Capt Shreyans was acutely aware of this fact. But undeterred he went about dong his assigned task with tremendous courage and devotion to duty. However as Capt Shreyans was trying to diffuse the mine, it exploded injuring him severely. He later succumbed to his injuries and was martyred. Capt Shreyans was a gallant soldier and a fine officer who laid down his life at the age of 27 years in the line of his duty. Capt Shreyans was given the gallantry award, "Sena Medal" on 15th August, 2003 for displaying extraordinary courage, leadership and devotion to duty.