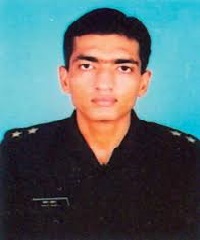 Captain Sanjeev Dahiya hailed from Haryana and was born on 10 Oct 1974 in a military family. Son of an Army officer, Lt Col RS Dahiya, he nursed the idea of joining the Armed Forces since his childhood. He continued to pursue his dream and eventually succeeded in following his father’s footsteps after completing his graduation. He got selected for the prestigious OTA at Chennai and was commissioned as a Lieutenant on 05 Sep 1998. He was commissioned into the Army Service Corps, the corps which handles the logistic support function of Indian Army. As his first assignment, Capt Sanjeev Dahiya was sent on attachment to 5 Rajput battalion, which he joined on 26 Sep 1998.

During July 1999, Capt Sanjeev Dahiya’s unit was deployed in Akhnoor sector of J & K. On the night of 16/17 Jul 1999, during one of the heaviest rainfalls of the season, a patrol consisting of one officer and seven soldiers of 5th Battalion of the Rajput Regiment was detailed to patrol the area between NS Pura and Malabela Post along the International Border. The assigned task was to check the enemy infiltration from this area falling under the command of 191 Infantry Brigade/10 Infantry Division. The patrol was subsequently divided into two subsidiary patrols. One subsidiary patrol, led by Capt Sanjeev Dahiya with three other soldiers was to patrol the area while the second subsidiary patrol of one Non-Commissioned Officer and three other soldiers was detailed to lay an ambush in the grove area near Pargwal canal head-works.

A school at Rohini in Delhi has been named as “Shaheed Captain Sanjeev Dahiya School” in his honour.