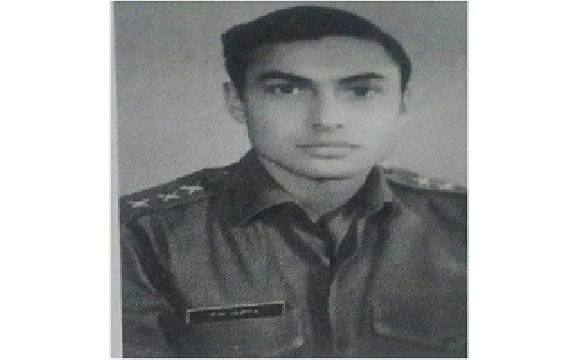 Capt Ravinder Nath Gupta hailed from Varanasi in Uttar Pradesh and was born on 20 Dec 1945. Son of Shri JN Gupta, he had two brothers as his siblings. He had a passion for the armed forces since his younger days and eventually got selected to join the prestigious NDA after his schooling. He joined the 28th NDA course in July 1962 and was part of the Foxtrot squadron. He later joined 37th IMA course at Dehradun and passed out as a 2nd Lieutenant.

He was commissioned on 15 June 1966 into 9 Engr Regt of the Corps of Engineers, an important combat support arm of Indian Army. He was was an affable and lovable person that endeared him to all the unit personnel. Fondly called "RN" by his comrades, he was a deep rooted soldier and soon developed into a fine officer. He always put his best foot forward in whatever he did and tried to achieve excellence. He was a keen sportsman too and was a good hockey player. He also loved playing basket ball whenever he could find time.  He was well read and had deep knowledge in various subjects.

During December 1971, Capt Ravinder Nath Gupta’s unit, 9 Engr Regt was deployed in the western sector under the command of Lt Col B T Pandit. The Regiment played a crucial role in the 'battle of Basantar'. Starting on December 4 the battle lasted for 12 long days, and was one of the major tank battles post WWII. It was one of the hardest fought battles and the objective was to bridge the Basantar River and secure the vital Shakhargarh sector. It was spearheaded by I Corps, which had 3 infantry divisions, 2 Armored brigades, 2 independent artillery brigades and the engineer brigade. On 3/4th Dec 1971, the Indian army crossed the international border led by 47 Brigade. Two more Brigades, 74 and 91 followed suit making the attack front formidably large.

One of the most crucial role during the Battle of Basantar was by the 9 Engineer Regiment, which was nicknamed the Thambi Regiment, as it was staffed predominantly by Tamilians. The regiment had 3 field companies each of which was assigned to the 3 infantry brigades of the 54 Infantry division. The Regiment had the challenging task of laying the operational track, for the Indian army, through some absolutely tough terrain and an area that was heavily mined. On 15 Dec an engineering Task Force comprising 3 units was grouped with 47 Infantry Brigade for crossing the Basantar River at Lagwal. This was the toughest part of the assignment as an operational track had to be constructed from Lohara to Lagwal, the enemy minefield had to be breached, and crossing places had to be constructed on two marshy nullahs.

The work started at 8 PM under heavy artillery fire from the Pakistani side. Maj Vijay Rattan Chaudhary, heading the Task force, had to breach the minefield and make the passage for tanks and other armored vehicles through the Basantar river. However the intense shelling  and lack of information about the obstacles, threw the unit into confusion. With not much time for reconnaissance, the CO Lt Col Pandit, decided to send a small unit under the leadership of Capt Ravinder Nath Gupta. Displaying cold courage and daredevilry, Capt RN Gupta managed to bring back vital information by 9:30 PM.

On 16 Dec 1971, 2 companies of 17 Poona Horse, took on the enemy’s counter attacks, and destroyed the armored formation, on the west bank. During this process, Capt Ravinder Nath Gupta, guided the  tanks, through the cleared minefield lane. However on 17 Dec at around 4 pm, when Capt RN Gupta and few more soldiers went to meet the Engr Regt 2-IC Maj Choudhury, they were hit by an enemy missile with devastating effect. Capt RN Gupta succumbed to his injuries and was martyred along with Maj Vijay Rattan Chaudhary, Maj SS.Mallik and 2nd Lt KM Mandanna. For their heroic exploits, the Regiment was called the Basantar Regiment, given the battle honor Basantar and Theater Honor of Punjab. Capt RN Gupta was a committed soldier and a fine officer, who led from the front and laid down his life at the age of 26 years in the line of his duty.

Capt RN Gupta was given the gallantry award, “Vir Chakra” for his extraordinary courage, unyielding fighting spirit, and supreme sacrifice. Capt RN Gupta is survived by his brother Shri Virender Gupta, who is now settled in USA.

Captain Ravinder Nath Gupta was one of the subtask force commanders for breaching a minefield to make vehicle lanes in an area in the Western Sector. This area was continuously under enemy artillery and mortar fire and information regarding the depth of the minefield was wanting. As time was very short, Captain Ravinder Nath Gupta volunteered to lead a small party on foot on a wide outflanking move to assess the other edge of the minefield.

By this method, the party was able to get this vital information within an hour. Subsequently, when the enemy attacked, he personally guided the tanks through the cleared minefield. While doing so, he was hit by an enemy artillery shell and killed.

In this action, Captain Gupta displayed gallantry, determination and leadership of a high order.

Capt Ravinder Nath Gupta's final resting place is at Garrison Graveyard Jammu. He continues to be a source of inspiration for 9 Engr Regt and Madras sappers.