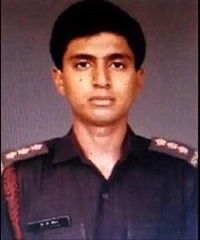 Captain PV Vikram was born in a military family to Lt Col PKPV Panicker and Kalyani Panicker at Manari House  Panniyankara, Kallai in Kozhikode district of Kerala on 24th Oct 1973. He joined 1st Std in KV No.1, Kozhikode in 1979 and was later shifted to KV Talbahat in UP due to his father’s transfer to that station from the field area. He continued his studies in KV No.1 Srinagar in VII and VIII class and then went on to do his class IX & X in KV Aurangabad Maharastra. He again joined KV No.1 Kozhikode in the XI Std and then shifted to KV Faridkot Punjab from where completed his XII Std. He joined NSS College, Ottapalam, Kerala and graduated in B Sc Computer Science in the year 1994.

Captain Vikram had set his sights on the army since his school days. He was an active member of NCC and passed `C’ Certificate of NCC. He joined Indian Military Academy, Dehradun and passed out on 8th Jun 1996, in the rank of 2nd Lieutenant. He got commissioned in the Regiment of Artillery to the Madhya Pradesh-based 141 Field Regiment. Incidentally, his father, Lt Col Panickar too had served in the same regiment and it was indeed a rare honour for Captain Vikram to serve in his father’s regiment.

During 1999, Captain PV Vikram’s unit 141 Field Regiment was deployed in the Kaksar sector of Kargil. On 02 June 1999, Capt Vikram was on duty at a forward post located at 17,500 feet in Kaksar. He was performing the assignment of forwarding observation officer in direct support of 4th battalion of the Jat Regiment in Kargil sector in Operation Vijay. The 4 Jat Battalion was assaulting the Pakistani Bunkers along with Capt Vikram leading through the fire barrage.

During this fierce exchange of fire which continued for several hours, a mortar shell fell very near to Capt Vikram when he was directing the artillery fire on to the enemy positions. Capt Vikram got injured severely and later succumbed to his injuries. Capt Vikram was a valiant and committed soldier who made the supreme sacrifice in the service of the nation. Capt Vikram was given the gallantry award ” Sena Medal” for his courage, indomitable spirit and sacrifice in the highest traditions of the Indian Army.

In a family where military tradition runs in the blood there were no ostentatious signs of grief. Lt Colonel Panicker, who worked in Bangalore, reached Kozhikode on learning about the death of his eldest son. To the hundreds who gathered at his home to offer condolences, he voiced the same matter-of-fact refrain, “A soldier should always be prepared to die in the battlefield. I participated in two wars against Pakistan, but I could not sacrifice my life for the country. He has sacrificed his life for the nation. I have no regrets. My son has accomplished what I could not. I am really proud of him”. He spoke with grace and dignity, like a true army man and proud of the achievements of his son.