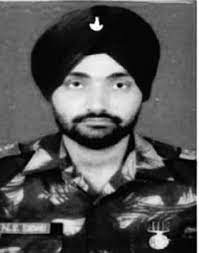 Capt Navpal Singh Sidhu hailed from Padampur Tehsil of Sriganganagar district in Rajasthan. Born in a military familiy, Capt Navpal had strong inclination to join the Armed Forces since his childhood. His father an army veteran, Lieutenant Colonel Agyapal Singh Sidhu had participated in wars against Pakistan in 1965 and 1971. Capt Navpal continued to follow his dream and eventually got selected to join the Army. He was commissioned into 19 MLI battalion of the Maratha Light Infantry Regiment, an infantry Regiment known for its intrepid soldiers and a rich history of battle honours.

Capt Navpal very soon gained expertise in field craft skills and developed into a competent soldier and a fine officer. After serving for few years with his parent unit, Capt Navpal was deputed to serve with 27 Rashtriya Rifles battalion, deployed in J & K for counter insurgency operations.

During 2002, Capt Navpal Singh Sidhu’s unit, 27 RR was deployed in Poonch sector of Jammu and Kashmir. As it was a militancy affected area the troops of the battalion had to maintain a high state of preparedness to launch counter-insurgency operations at a short notice. By Dec 2002, Capt Navpal had already participated in such operations and gained experience in dealing with various exigencies. On 30 Dec 2002, the unit received information about the presence of some hard core terrorists in Surnakote area of Poonch district and an immediate plan was drawn to launch an operation against the terrorists. Capt Navpal was included in the team , tasked to neutralize the threat of the terrorists in the AOR(Area of responsibility) of the unit.

The assault team reached the suspected area and launched the cordon and search operation as planned. Shortly the troops made contact with the terrorists who fired at them on being challenged. It triggered a intense gun battle with heavy firing form both sides. Capt Navpal in a show of courage and daredevilry manged to eliminate three terrorists. However during the exchange of fire Capt Navpal too got hit by gun shots and got seriously injured. He later succumbed to his injuries and was martyred. Capt Navpal Singh Sidhu was a valiant soldier and an officer par excellence who led his men from the front like a good military leader. His sacrifice paved the way for subsequent coordinated assault wherein all the militants were successfully neutralized.