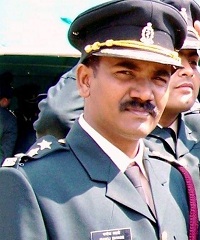 Capt Manoj Kumar Dhyade was born on 04 Oct 1977 in Swatantry Sainik family and hailed from Degloor in Nanded district of Maharashtra. Son of Shri Swatntry Sainik Kashinathappa and Smt Saraswati, Capt Manoj always nursed the idea of joining the Army and following into the footsteps of his father. After completing his schooling Capt Manoj got selected to pursue medicine and graduated from K J Somaya medical college in Mumbai in April 2001. He then worked as a medical officer in Nandurbar district of Maharashtra. He later completed his post graduation from K.E.M. Hospital in Mumbai in 2003. He resumed his work as an additional district health officer with Govt of Maharashtra in Nandurbar but wasn’t satisfied with his job as his heart was set to the life in the Army.

He continued to pursue his dream and eventually got selected to join the Army in the ‘Army Medical Corps’ in 2006. He joined the medical officers’ training academy at Lucknow and got posted to the Command Hospital in Pune in the rank of a Captain. Later got posted to 403 Field Ambulance unit, deployed in Leh in  Ladakh in April 2007.  Besides being a medical professional, Capt Manoj was an excellent chess player and music lover too.

During 2007,  Capt MK Dhyade’s unit, 403 Fd Amb was deployed in Kupwara district of J & K along the LOC. His unit was stationed at a forward location at a height above 12000 ft, where the temperatures invariably would fall to as low as -15 degrees. On June 30th, 2007, Capt Manoj was given an operational task and he had to reach the unit at the earliest. The location could be reached by helicopter but around 4.00 pm the weather packed up and the air sortie could not be undertaken. Despite hostile weather conditions, Capt Manoj decided to walk on foot to reach to his unit.

As Capt Manoj was on his way traversing through the challenging terrain, the weather conditions worsened further. But undeterred, he continued to march on. However as the weather deteriorated further, he suffered a cardiac arrest. Eventually he lost the battle with life and a fine officer was lost in the service of the nation. Capt MK Dhyade was a highly skilled professional and a committed soldier who laid down his life at the age of 30 years in the line of his duty, following the highest traditions of the Indian Army. He is survived by his mother Smt Saraswati, wife Dr. Pratibha, and daughter Mansi.