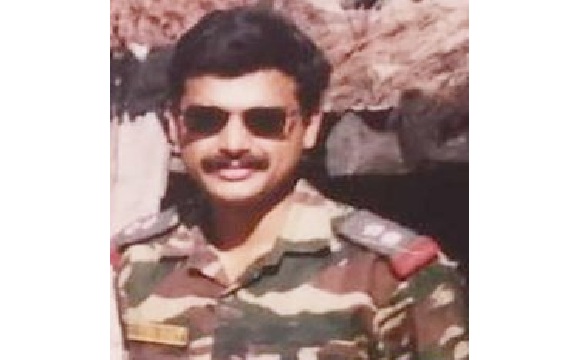 Capt KC Dharashivkar hailed from Latur district in Maharastra and was born on 1st July 1976. Son of Late Shri Chandrakant Kulkarni and Smt Lalita Kulkarni, he was second among three siblings. After completing his primary education he went to study at Sainik School Satara. It is at this school that the foundation of his future military career was laid. He was inclined to join the armed forces since his childhood and this passion grew along with his age. His father Shri Chandrakant Kulkarni, a college principal also encouraged him to follow his dream.

Eventually he got selected to join the NDA  at Khadakwasala after his schooling and later moved to IMA Dehradun for further training. He passed out from IMA in the year 1997 and became an officer at the age of 21 years. He was commissioned into the Army Service Corps, the logistic arm of the Indian Army. He was posted to serve with 8 Madras, an infantry battalion as his first assignment. 8 Madras known as ‘‘Gallant Guerrillas’’ was raised on August 20, 1948 and since then it had participated in various operations. It was awarded ‘Theatre Honour East Pakistan - 1971’ for its victory in the battle of Ramnagar during 1971 Indo-Pak war.

In 1999, when the Kargil war started, Capt KC Dharashivkar's unit 8 Madras was deployed in Kupwara sector. Within short span of joining the unit, Capt Dharashivkar, developed into a gritty soldier and fine officer, who was ready to take challenging tasks. For his determination and prowess, he was made the lead commander of the Ghatak Platoon of his battalion. Only the most physically fit and motivated soldiers made it into the dreaded Ghatak platoon that made up the first wave of Indian Army’s counterattack forces.