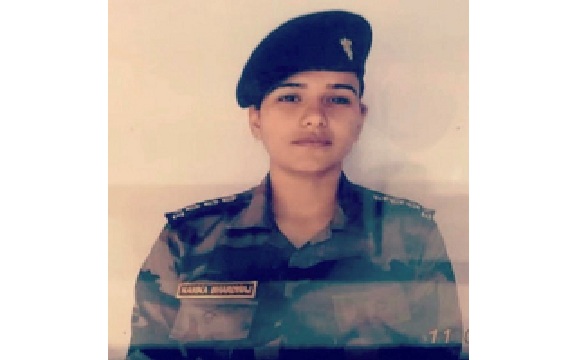 Capt Kanika Bhardwaj was born on 12th July 1988 in New Delhi. Born as a daughter-brought up as a son, she was a happy-go-lucky child with a no-nonsense attitude. She completed her 12th from Hans Raj Model School, Punjabi Bagh New Delhi, leading up to the most impatient 4 years of B.Tech, as she always wanted to join the Air Force as a female pilot. But as fate had it, she had a pelvic injury just a few months later, which broke her dreams to fly a fighter jet. That still did not deter her for even a moment and she managed to crack SSB (Tech Entry) in the first attempt.

She passed out of the OTA (2013 batch) as a lieutenant and was commissioned  into the corps of EME, the arm having varying responsibilities related to the design, development, trial, inspection and refit of weapon systems and equipment of Indian Army.  She was super excited to get Kashmir as her first posting. It was ironic that this young girl, a Kashmiri Pandit, with roots in Mirpur district of POK got to serve and defend her country. It also spoke of the extreme courage shown by the parents, considering the history associated with the community.  Capt Kanika had the good fortune to participate in the first march by women personnel from our armed forces at the 66th Republic Day parade in 2015, where the then president of the United States of America - Barack Obama was the chief guest.

Described as a girl with this amazing concoction of courage and compassion, her batchmates and friends remember her as "Always a phone call away" friend, who was the go-to person for the resolution of any or every problem. Her commanding officer has a very special incident to share: "One day, approximately at 2300 hours, our officer's mess sentry spotted a suspiciously moving civilian. It was drizzling and dark. The civilian on being challenged went to the ground and hid in the drain. We all came to know and moved towards the post. Meanwhile, we saw Capt Kanika coming from the other side of the road. She was with her weapon and she immediately took control of the situation. She swiftly completed the entire basic procedure of searching the area and commanding the men in a very tense and unpredictable scenario.

She was leading from the front at all times. She managed to establish communication with the civilian and got him in her confidence as he was very scared after being challenged, moved him out of the drain, called other nearby civilians, authenticated his verification, and then handed him over to them. CO watched all this proudly and silently along with his seniors. They were constantly monitoring the event from the post, but Capt Kanika handled the entire drill very professionally yet compassionately. She was a brave and highly motivated officer' More than Kanika, this incident reflects the integrity and compassion of the Indian Army in Jammu & Kashmir. But, All this came to a tragic end on 17th January 2016 in a fateful road accident, while she was shifting her base towards her next posting. Thus a committed soldier and a fine officer was lost in this tragic accident.

Capt Kanika Bhardwaj is survived by her parents and two younger siblings but cherished by old and new friends and family.