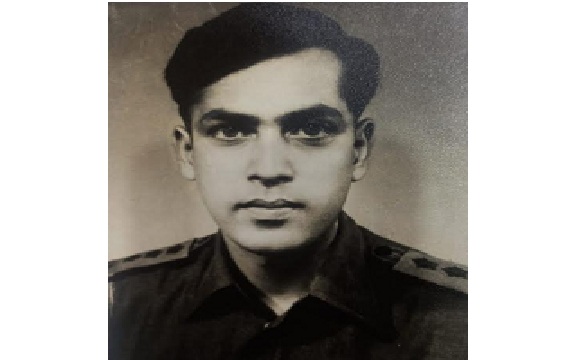 Captain Jatinder Nath Sud hailed from Shimla district in Himachal Pradesh and was born on 3rd Mar 1942. Son of Shri Khushi Lal Sood and Smt Sushila Devi, he had two brothers Joginder Lal & Hemant and sister Sudershan as his siblings. Though coming from a business family, he was inclined to serve in the Armed Forces and continued to follow his passion while growing up.  Eventually he got selected to join the Army after finishing his graduation.

He was commissioned into the 2/5 GR (Frontier Force) battalion of 5 Gorkha Rifles Regiment, an infantry Regiment known for its gallant soldiers and various heroic battle exploits. By 1971, he had been promoted to the rank of Captain and had gather field experience too. As the war clouds with Pakistan were gathering on the horizon, his unit 2/5 GR (FF) got deployed on the eastern front.

In December 1971 India had to go to war with Pakistan as the genocide perpetrated by the Pakistani army in their erstwhile eastern part of the country had resulted in an unprecedented influx of millions of refugees into India. But months before that the Army units were put on high alert and were moved to the forward locations. Capt JN Sud's unit 2/5 GR (FF) as part of 340 Independent Infantry Brigade Group, was moved from Trivandrum to the Eastern border.  The 20 Mountain Division under command of 340  Independent Infantry Brigade Group was responsible for operations in this sector and was tasked to capture Bogra town by outflanking the defences at Hilli. As part of the overall plan, 2/5 GR (FF) was called upon to to take part in "Battle of Pirganj" and "Battle of Bogra". Capt JN Sud was functioning as Platoon Commander of RCL guns and was part of the support Company of the battalion. The "Battle of Pirganj" commenced on 06 Dec 1971 after the capture of Mohanpur bridge in that area. The 2/5 GR (FF) troops concentrated west of Krakatoa river on 06 Dec to prepare for the "Battle of Pirganj".

'A' and 'C' companies mounted on PT-76 tanks crossed the Krakatoa river on 07 Dec and sped towards Pirganj. By 1600 hrs on 07 Dec, 'C' company dismounted from the tanks and swept through the Pirganj town forcing the enemy troops to pull out. By 2200 hrs the B and D companies which had started on foot also reached east and west of Pirganj. However it was very important to hold on to Pirganj in case of enemy counter attack. In the early morning of 08 Dec, the enemy forces launched a determined counter attack on the 2/5 GR (FF) battalion positions in Pirganj. Capt JN Sud was rushed forward to assist in repulsing the enemy counterattack on C company in the wee hours of 08 Dec.

After positioning his RCL guns, Capt Sud rushed up to the two Medium Machine guns detachments which were under heavy enemy mortars and small arms fire. He took personal charge of the detachments and engaged the enemy.  At about 0500 hrs, by relentless pressure, the enemy led by their Commanding Officer, crept up to 20 yards and made a desperate assault on the two Medium Machine Guns posts and managed to destroy one of them. Capt Sud sensing the danger to his Medium Machine Gun, rushed out of his trench and assaulted the enemy.  However while doing so, Capt Sud got hit by a burst of automatic fire and was grievously injured. By his daring act of valour, he saved his Medium Machine Guns and helped his comrades to break the enemy attack. However, he soon succumbed to his injuries and was martyred. Capt JN Sud was a gallant soldier and a gritty officer who led from the front and laid down his life in the line of his duty. Capt JN Sud was given the nation’s third highest gallantry award “Vir Chakra” for his outstanding courage, camaraderie, fighting spirit and supreme sacrifice.

The Citation for the Vir Chakra Awarded to him reads:-
Captain Jatinder Nath Sud was in command of a platoon which was rushed to assist in repulsing the enemy counter-attack in Pirganj in the Eastern Sector on the night of 7 December 1971. After positioning his weapons, he rushed up to two of our MMG detachments which were under heavy enemy mortar and small arms fire and took personal charge of the detachments and engaged the enemy. At 5 a.m. the next day, the enemy led by their commanding officer, crept up to 20 yards made a desperate assault on the two MMG posts and managed to destroy one of them. Captain Sud sensing the danger to the other gun rushed out of his trench and assaulted the enemy. He was hit by a burst of automatic fire. By his act of valour, he saved his medium machine gun and helped his comrades to break the enemy attack.
In this action, Captain Sud displayed gallantry, leadership and devotion to duty of a high order.