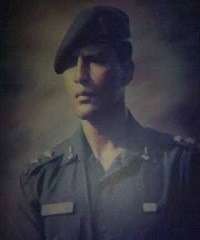 Captain Hemant Prem Kumar  was born on 29th October 1974 and hailed from Pune in Maharashtra. Born in a military family of Lt Col Joseph Prem Kumar and Mrs Priscilla, Capt Hemant nursed the idea of joining the armed forces since his childhood. He followed his dream and joined the army at the age of 23 years. He was commissioned on 5th Sep 1997 into 15 Jat battalion of the Jat Regiment, an infantry regiment well known for its gallant soldiers.

During 2000, Capt Hemant Prem Kumar’s unit was deployed in Temenglong district of Manipur. During that period Capt Hemant  was performing the duties of Adjudant as well as functioning as commander of the Ghatak platoon of the battalion. At that time a number of insurgents belonging to NSCN-IM (National Socialist Council of Nagaland) one of the factions of NSCN led by Isak Chishi Swu, were active in the AOR (area of responsibility) of the unit. Capt Hemant Kumar in a short span of time developed a strong intelligence network and undertook numerous operations against the insurgents in the area.