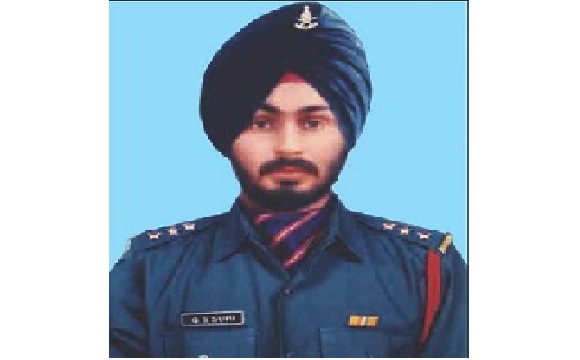 Captain Gurjinder Singh Suri was born on 4th July 1974 in the Ambala district of Haryana in a military family. Son of an army veteran Lt Col T P Singh and Smt Surjit Kaur, Capt Gurjinder had a younger brother Randhir Singh. His grandfather, Subedar Gurbaksh Singh had participated in overseas campaigns during World War II and also during the wars in 1947-48 and 1962. His father Lt Col TP Singh Suri, a Sikh Light Infantry veteran, took an active part in the 1971 war with Pakistan in the Naushera sector of Jammu and Kashmir.

Capt Gurjinder studied in Army Public Schools at military stations wherever his father was posted. He wanted to follow in the footsteps of his father and serve in the Armed Forces since his childhood. Eventually, his dream came true and he got selected to join the National Defence Academy, Khadakvasla, in July 1993. He had opted for Sikh Light Infantry as his parental claim but owing to the paucity of vacancies at that time, he could not get the infantry regiment of his choice. On 7th June 1997, he got commissioned into the Army Ordnance Corps, the corps responsible for providing material and logistical support to the Indian Army during war and peace.

During 1999, Capt Gurjinder Singh was serving with 12 Bihar (On attachment) and the unit was deployed in J & K, entrusted with the task of anti-terrorist operations. Captain Gurjinder was platoon commander of Ghatak team which was deployed on the Faulad post, located in the forward-defended area in Jammu & Kashmir. On 9th November 1999, the Pakistan Army launched an attack on the post, preceded by a heavy artillery bombardment. The Pakistani attack was repulsed and Capt Gurjinder deployed his men to deal with any reinforcements or interference by the enemy. But in a bid to put an end to frequent hostile actions by the enemy, Indian Army decided to launch a well-coordinated operation. The operation was called “Operation Birsa Munda”, an Indian tribal freedom fighter and folk hero who belonged to the Munda tribe and had spearheaded a tribal religious movement in the late 19th century, during the British Raj. Capt Gurjinder on 09 Nov 1999, then launched the operation as planned to clear the enemy bunkers one by one along with his comrades and in this process, one of his soldiers got injured badly.

Leading from the front, Capt Gurjinder dashed forward and killed two enemy soldiers with his AK 47 rifle and silenced the machine gun of the enemy. However, during the process, Capt Gurjinder received a burst of gunfire in his arm. Unmindful of his injury, he continued to lead his men and lobbed two hand grenades into a bunker. He then entered the bunker spraying bullets and killed one more enemy soldier. At this point, he was hit by an enemy rocket-propelled grenade and was critically wounded. Despite his injury, he declined to be evacuated and continued to exhort his men till he breathed his last. Displaying exceptional courage and military leadership Capt Gurjinder Suri was martyred at the age of 25 years in the service of the nation. In the operation a total of 17 enemy soldiers were killed, 14 bunkers were destroyed and a large number of arms and assorted ammunition were captured from the enemy post. Besides Capt Gurjinder Suri, the other martyred soldiers during the operation included Sepoy Manoj Kumar Singh VrC (Posthumous),  Sepoy Birendra Kumar, Mention-in-Despatches (Posthumous), and Lance Naik Birendra Nath Tiwari, Mention-in-Despatches (Posthumous).

Capt Gurjinder displayed extraordinary bravery and fighting spirit in the face of the enemy and made the supreme sacrifice in the highest traditions of the Indian Army. He was awarded “Maha Vir Chakra” and achieved the distinction of being the first officer from the Army Ordnance Corps to get the coveted award. Capt Gurjinder Singh Suri is survived by his father Lt Col T P Singh(Retd), mother Smt Surjit Kaur and brother Lt Col Randhir Singh.

The Citation for the ‘Maha Vir Chakra’ awarded to him reads:-

Captain Gurjinder Singh Suri was the Ghatak platoon commander and was located at the forward-defended locality in Jammu & Kashmir. On 9 November 1999, the enemy launched an attack on the post, which was successfully repulsed, and the enemy retreated. Seizing the opportunity, the Ghatak platoon was ordered to pursue the fleeing enemy. Captain Suri immediately deployed his support group to take care of any reinforcement or interference and set out to clear the bunkers one by one. When he saw that one comrade was grievously injured in the process, he quickly moved on with his buddy, to clear the bunker. He killed two enemy soldiers with his AK rifle and silenced the machine gun. However, in the process, he received a burst in his left arm. Unmindful of his injury, Captain Suri continued to inspire his men to accomplish the task. He then lobbed two hand grenades into a bunker and entered inside spraying bullets with his AK rifle killing one enemy soldier instantly. At this point, he was hit by an enemy rocket-propelled grenade and was critically wounded. He refused to be evacuated and continued to exhort his men till he breathed his last. Inspired by his leadership, the Ghataks fell upon the enemy with vengeance and annihilated them. Captain Gurjinder Singh Suri, thus, displayed conspicuous bravery and junior leadership of the highest order in the face of the enemy and in the process made the supreme sacrifice.

His grandfather Subedar Gurbaksh Singh paying tributes to his grandson had remarked, “Gurjinder has performed his duty as a soldier to his motherland.”

Captain Suri was the solitary recipient of the MVC on Independence Day in 2001. The medal was stolen from his residence in Mohali, Chandigarh, in 2006, much to the distress of the family. Squadron Leader T.P.S. Chinna (Retired) came across this medal in an antique shop in Delhi. It had the number and name of Captain Suri on it. He obtained the details of the family from the Army HQ and sent it to Colonel Singh. The joy of the family knew no bounds on receiving it on Independence Day in 2012. Colonel Singh’s reaction was  “Honour has been restored. I am the happiest person in the world as the most precious thing of my life, my son’s medal is back with me”.

When a soldier from 12 Bihar came to the residence of Colonel T P Singh to hand over the belongings of Gurjinder, he told Gurjinder’s father “You have lost a son, but the unit has lost a father figure.”