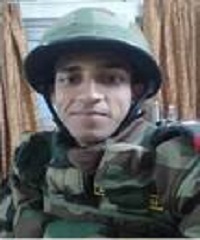 Captain Ashutosh Kumar was born on 15 Oct 1996 and hailed from Parmanpur village of Bihar’s Madhepura district. Son of Shri Ravindra Yadav and Smt Geeta Devi, Capt  Ashutosh had two sisters Khushboo and Anshu as his siblings. He did his schooling at Sainik School Bhubaneshwar in Odisha. While studying in the Sainik School his inclination towards the Armed Forces grew and the foundation of his future military life was laid.

His resolve to join the Army grew with the age and consequently, he got selected for the prestigious NDA after finishing school. He later went to  IMA Dehradun and was commissioned as a Lieutenant in June 2018 at the age of 21 years. He got commissioned into 18 Madras of the Madras Regiment, an infantry Regiment well known for its dauntless soldiers and numerous battle exploits. As a young Lieutenant, he got posted to the J&K area as his first assignment. He soon evolved into a committed soldier and a fine officer with superior field-craft skills.

During Nov 2020, Capt Ashutosh Kumar’s unit 18 Madras was deployed in the Kupwara district of J&K close to the Line of Control(LOC). The unit troops were engaged in counter-insurgency operations on a regular basis as its AOR (Area of Responsibility) was affected by active militancy. The LOC remained highly active and volatile with ceasefire violations occurring very often and without any warning. Besides manning the forward posts in the Machil sector in Kupwara district,  Capt Ashutosh Kumar’s unit also undertook operations to check the infiltration bids as its AOR was prone to infiltration by the militants from across the border. On 08 Nov 2020, one such infiltration bid was reported by the BSF patrol at around 0100 hrs near the anti-infiltration obstacle system about 3.5 Kms from the LOC.

The citation for “Shaurya  Chakra” awarded to him reads:

Captain Ashutosh Kumar was performing the duties of Ghatak Platoon Commander deployed at a post close to the line of control in Jammu and Kashmir. On 08 November 2020, on receipt of information of the likely escape of terrorists Late Captain Ashutosh proceeded to establish stops along the likely routes of escape. At 0630 hours cut off group led by Late Capt Ashutosh observed the movement of escaping terrorists. The officer displaying raw courage continued to maintain contact and closed in with the terrorists. While closing in, the scout of the group sustained a bullet injury. Sensing grave danger to own troops and seeing the terrorist escape, the officer with utter disregard to his personal safety and displaying grit of steel while being completely exposed to terrorist fire, with complete calmness took an aimed shot and brought down the terrorist at a very close range. In the ensuing gunfire, he sustained a gunshot wound and succumbed to injuries on the spot. For displaying indomitable courage and professional acumen of the highest order in saving his fellow soldier’s life and eliminating hardcore terrorists with utter disregard to his own safety, Captain Ashutosh Kumar is recommended for the award of “SHAURYA CHAKRA” (POSTHUMOUS).