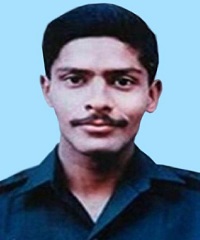 Capt Arvind Vikram Singh was born in a military family and completed his school education from Army Public School Dhaula Kuan in Delhi.  He always wanted to don the military uniform like his father right from his younger days. He continued to work towards his dream and eventually cracked the prestigious NDA examination and joined the 80th course in the academy in 1988. He got commissioned into 2 Garhwal Rifles battalion of the Garhwal Rifles Regiment, an infantry regiment well known for its valiant soldiers and a number of battle honours. After passing out of the Indian Military Academy (IMA) then Lt AV Singh got posted to the J&K area as his first assignment.

During 1994, Lt AV Singh’s unit was deployed in the Baramulla district of J&K. As the unit’s AOR (Area of Responsibility) was seveiourly affected by militancy, the unit was engaged in counter-insurgency operations on a frequent basis.  Lt  AV Singh within a short time gained proficiency in such operations and proved his mettle in a number of operations. He undertook one such counter-insurgency operation on 22/23 May 1994.  He was tasked to lead an ambush in Palhalan village on the night of 22/23 May 94. Lt AV Singh along with his team moved to the ambush area on  22nd May night in total stealth and waited in silence to launch the ambush. On 22 May  suspicious movement of three persons was observed from the direction of Village-Palhalan. Lt AV Singh displaying courage and nerves of steel let the militants come up to the Centre of the ambush and exhibiting utter disregard to personal safety managed to eliminate one militant.  The other militants directed heavy volume of fire and lobbed grenades to break the cordon but this did not deter 2nd Lieutenant  AV Singh and his party to close in and with unflinching courage, they shot dead one militant and overpowered the other militant alive. As a result of this gallant action besides apprehending a dreaded militant, two rifles AK-56 with six magazines, one grenade, and 147 rounds were recovered.

Later he was promoted to the rank of Captain and continued to show superior soldierly skills in various operations. In Jul 1994, Capt AV Singh was tasked for another operation. After conducting operations at village-Hayan at 1830 hours on 07 Jul 94 the unit troops moved tactically to cross Indus River having a span of 400m with three prominent water channels. AT About 1920 hours on 07 Jul while crossing the Indus River over an improvised three feet wide wooden bridge Rifleman Digamber Singh lost balance and fell into the fast-flowing  Indus river. Capt AV Singh displaying exemplary courage with total disregard for personal safety jumped in the torrential current of the mighty Indus to save his fellow soldier.  Capt Arvind Vikram Singh negotiating through huge boulders managed to grab hold Rifleman Digamber Singh and tried to bring him to safety. However, while doing so Capt AV Singh got swept away and laid down his life in trying to save the soldier. Capt AV Singh was a valiant soldier and a gritty officer who laid down his life in the line of his duty. Capt AV Singh was given the gallantry award “Shaurya Chakra” for his outstanding courage, leadership, comradery and supreme sacrifice.