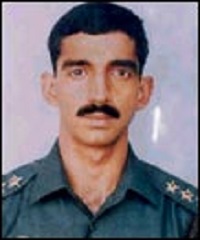 Captain Arun Singh Jasrotia hailed from Sujanpur in Pathankot district of Punjab and was born on 16 August 1968. The only son of an Army veteran Lt Col Prabhat Singh Jasrotia and Smt Satya Devi, Capt Arun Singh Jasrotia belonged to the family of war veterans. Besides his father, his grandfather too served in the Army and retired as a Lt Col with 2 Dogra Regiment.
Capt Arun also had a dream to wear Army uniform like his father and grandfather and followed his dream by joining NDA after completing his schooling at Kendriya Vidyalaya No. 1, in Pathankot. He was commissioned into 8 Bihar battalion of the Bihar Regiment on 17 December 1989. During his initial service, Capt Arun took part in “Op Rakshak” under 8 Mountain Division and 28 Inf Div sector and proved his mettle as a professional and committed soldier. He was awarded ‘Sena Medal’ for his exceptional service and devotion to duty. Later Capt Arun was inducted into 9 Para (Special Forces), a unit known for daredevil operations in very demanding situations.
Lolab Valley Operation: 15 Sep 1995

During 1995, Capt Arun Singh Jasrotia’s unit was deployed in J & K area for anti-insurgency operations. On 15 Sep 1995, Capt Arun’s unit had received credible information from intelligence sources about presence of 20 terrorists in a cave in Lolab valley. A decision was taken by the security forces to launch a search and destroy operation to nab the terrorists under the leadership of  Capt Arun.

Capt Arun along with his troops swung into action and set off to an arduous climb towards the suspected hideout. After about nearly ten hours the team reached the general area at a height approximately 3000 meters in the Lolab Valley of Jammu & Kashmir. As the team came closer to the cave, they were attacked by the militants from well-entrenched positions. Capt Arun, having realized the situation decided to face the terrorists himself and killed one with his commando knife. He killed one more terrorist with a hand grenade and lunged forward towards the cave.

While moving forward towards the cave Capt Arun got hit by a bullet in the shoulder and was grievously injured. But he refused to move back and in a rare show of courage, shot dead the terrorist who had fired at him. When he reached near the cave, he was hit by two more bullets in the gut and chest and collapsed. Inspired by his bravery and leadership, the troops attacked the militants with double vigour and aggression and eliminated all of them. Capt Arun later succumbed to his injuries and was martyred. He was awarded the nation’s highest peace time gallantry award “Ashok Chakra” for his outstanding courage, devotion to duty and supreme sacrifice. The Punjab government also conferred Captain Arun Singh Jasrotia with the “Nishan-e-Khalsa” award in 1999.

The citation for the Ashoka Chakra awarded to Capt Arun Singh Jasrotia reads:

On 15th September 1995 Captain Jasrotia, SM of 9 PARA (SF) while leading his team in Lolab Valley, J&K came under heavy rocket and small arm fire. In order to extricate his men, this brave officer crawled forward and in-spite of being injured gravely killed one terrorist with his commando knife and neutralized the other terrorist by lobbing grenades. His brave and gallant action gave opportunity for his comrades to take cover and engage the remaining terrorists effectively. In the ensuing firefight, the brave officer succumbed to his injuries. However, in retaliation, the commandos eliminated all remaining terrorists. For his gallant action, Captain Arun Jasrotia was awarded the highest peacetime gallantry award of ASHOKA CHAKRA posthumously.