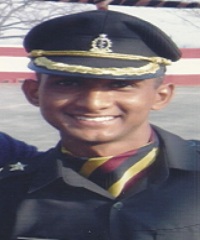 Capt Arun Shankar was born on 06th Jan 1982 and hailed from Thrissur district in Kerala. Son of an Army veteran Hony Capt Sivasankaran, Capt Arun did his initial schooling  from Kendriya Vidyalaya Sri Ganganagar in Rajasthan. Later as his father was transferred to serve at various places, he studied in various schools in Gangtok, Lucknow and Chennai. Finally he completed his high school form Kendriya Vidyalaya at Thrissur in Kerala. During his student days, Capt Arun was brilliant in academics and his name on the wall of fame bears that testimony.

Right from his younger days, he was always inclined to join the Armed Forces and serve with the Army Medical Corps like his father. He continued to pursue his dream and eventually got selected to join the prestigious AFMC (Armed Forces Medical College) in the year 1999. Besides academics, Capt Arun had interest in music and excelled in playing tabla. After completing his course at AFMC, he was posted to the Kashmir valley as his first assignment to serve with the 308 Field hospital.

During Dec 2006, Capt Arun’s unit was deployed at Siachen Glacier, in Ladakh region. The unit was deployed at the Saltoro ridge along the AGPL (Actual Ground Position Line) South-West of the Siachen Glacier. Siachen considered to be the second longest glacier in the world is also known as the world’s highest battleground, situated at an altitude of 5,700 meters. The extremely low temperatures – which can drop to minus 60 degrees Celsius during winter – have claimed hundreds of lives since 1984, when India and Pakistan stationed their troops on the Glacier. The soldiers at the Saltoro ridge located about 20 km South-West of Siachen have to fight not only the treacherous enemy but the extreme hostile weather too on a daily basis.

Capt Arun as a medical officer was responsible to provide the medical support to the troops stationed at the Glacier. The unit had to face medical emergencies on a regular basis on account of the harsh operating conditions specially in the winter months.Capt Arun handled such situations many a times and ensured that various protocols were followed to keep the troops fighting fit. Besides taking precautions while performing operational duties, the soldiers had to resort to various measures to keep them warm and remain healthy. The extreme cold conditions necessitated the use of diverse specialist equipment like heaters, diesel powered generating sets, rescue equipment, warm clothing etc. The diesel powered generating sets were often used to power lighting, electric heaters and other equipment. On 23 Dec 2006, Capt Arun was resting in his tent that had the generating set running to power the heater. Due to unknown reasons, Capt Arun got seriously affected with the Carbon Monoxide released by the diesel powered generating set and lost his life.

Capt Arun Shankar was a committed soldier and a fine officer who laid down his life in the line of his duty.