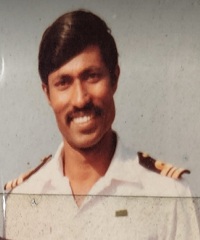 Captain Arun Kumar Nandy was born on 12th April 1956 in Mumbai, Maharashtra. Son of a Navy veteran PO Nripendra Lal Nandy, he was youngest among three siblings. He was passionate to join the Indian Navy since his younger days to serve the country like his father. His father being in the Navy, held a transferable job and thus, Capt AK Nandy studied and grew up in various places like Mumbai, Delhi, and Kolkata. He continued to follow his passion while growing up and eventually got selected to join the National Defense Academy.

He joined the 51st NDA Course in Kilo squadron and acquitted himself quite well in varous aspects of training. He was commissioned as a sub Lieutenant on 01 Jan 1978 at the age of 21 years. He was commissioned into INS Shardul, the lead ship of the Shardul-class amphibious warfare vessels of the Indian Navy. After serving for a few years, he got married to Ms Ruma on 18 Nov 1984 and the couple had a daughter Chandrima and son Arijit.

After commissioning into INS Shardul, Capt AK Nandy also served with various Indian Navy ships including INS Amini, INS Gharial, INS Dunagiri, CGS Varuna, and INS T-56 before his final afloat appointment as EXO of famed battleship INS Rajput in December 1996. A skilled Naval communications officer, he excelled in the Electronic Data Processing System Analysis course. Captain AK Nandy commanded his ship as part of the Indian Peace Keeping Force operations in Sri Lanka. This included providing operational and logistic support for the IPKF, maintaining round the clock ship patrols in the Palk Strait and transshipping refugees, many of whom had to be given medical attention at sea.

Captain AK Nandy also served in the Indian Coast Guard, first on CGS Varuna in 1988 during which multiple anti-smuggling operations were carried out followed by an appointment in CGHQ as Director in 2004. Following Captain AK Nandy’s superannuation on 30 April 2010, he was initially deputed by the Indian Navy and then served as a key advisor to the Government of India on maritime security. Such was his keen attention to detail and in-depth knowledge of maritime and regional security, that he was repeatedly sought after for multiple extensions in a consultant role despite reaching retirement age 5 years earlier. Captain AK Nandy played a vital role in ensuring regional and maritime security both during and after his service in the Indian Navy. A patriotic and dedicated soldier, he was passionate about protecting the motherland and went above and beyond in his quest to ensure regional security.

Captain AK Nandy and his wife, Mrs Ruma Nandy celebrated their 36th wedding anniversary on November 18, 2020. Captain AK Nandy retired after 43 years of service in April 2021. He succumbed to Covid in May 2021, less than a month after retirement in Base Hospital, Delhi. He was cremated with military honors in Brar Square and his remains were immersed in the Yamuna from 2 Delhi Naval Unit NCC, a unit he commanded from 2002 to 2004. Captain AK Nandy is survived by his daughter, Mrs Chandrima Nandy Bhattacharya based in New York (USA), and son Mr Arijit Nandy based in Seattle (USA).