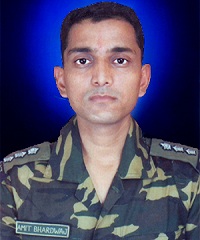 Capt Amit Bhardwaj was born on 4th March 1972 and hailed from Jaipur in Rajasthan. Son of Shri O P Sharma and Smt Sushila Sharma, Capt Amit grew up with very good moral values from a very tender age and would donate some part of his pocket money to the poor from the age of seven. He completed his schooling from St. Xavier’s Boys school and was an active member of St. Xavier’s Old Boys Association. He was a keen sportsman and excellent table tennis and football player.

Capt Amit Bhardwaj’s politeness during his student days, won the hearts of his teachers and students alike, making him a very popular figure in the school. He completed his graduation from Rajasthan University and always had a desire to join the armed forces and serve his motherland. He joined the army in 1997 and was commissioned into the 4 Jat of the famed Jat Regiment, a regiment known for its valiant soldiers and numerous battle honours. After his first tenure at Pithoragarh, Capt Amit Bhardwaj was posted to Kaksar area in Kargil.

There were reports about Pakistani infiltration in May 1999 and Capt Bhardwaj’s unit was given the task to verify the legitimacy of these reports. On May 14, the 4th Jat Battalion launched a patrol to check the strategically important Bajrang post with Lt Saurabh Kalia leading the five-man patrol. Heavy snowing in the area prevented them from reaching Bajrang post on that day, and they resumed their patrol the day after. But as they neared their objective around 3.30 pm on May 15, they were suddenly fired upon by the intruders who had occupied the Bajrang Post. They reported the incident back to battalion headquarters, seeking urgent reinforcements. Lt Kalia and his team fought back but soon ran out of ammunition. They were surrounded and captured before the reinforcements arrived.

Capt Amit Bhardwaj then led a team of 30 soldiers and launched the search mission for Lt Kalia and his troops on 17th May 1999. On reaching the Bajrang post, he realized that the number of enemies was much more than they had anticipated. Realizing that they were outnumbered, he ordered his men to retreat back and report to the base camp for help. For the retreat to be successful, one had to provide cover fire and engage the enemy while the troops retreated. He led from the front to provide cover fire which enabled his 30 soldiers to reach back their base camp safely. Capt Bhardwaj killed more than 10 infiltrators in the process. He had one soldier Hav Rajvir Singh Sheoran supporting him alongside. However, Capt Bhardwaj and Hav Rajvir Singh Sheoran got severely injured during the exchange of fire and later succumbed to their injuries. 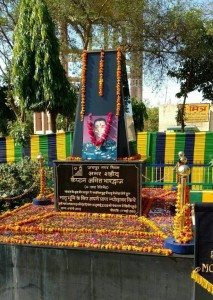 Mrs Sunita Dhonkaria, sister of Capt Amit Bhardwaj, paid tribute to her brother on his “Day of Martyrdom” on 17 May 2019…..

Twenty long years have gone by since my brother, Amit was martyred in the Kargil war, but he still lives in the hearts of all family members and the people who knew him. A tough soldier from outside, he had a heart full of compassion and empathy. Though three years younger to me, he taught me the value and significance of being compassionate.

Even during his younger days, Amit would show his concern for poor and needy and often help them in whichever way he could. Our family and friends have many stories to share about his acts of kindness. He was maintaining a dairy to jot down his thoughts and had mentioned in it that he wanted to join the armed forces or civil services to serve the country and make a difference.

He joined the army and earned his stars on 5th Sep 1997, and after a brief stint at Pithoragarh, he went to Kargil in 1998. In Dec 1998, he got involved in a major accident while traveling with his fellow soldiers, when their truck fell into a deep trench on the way from Kargil to Leh but he escaped with minor injuries. He got saved three times like this in different incidents as mentioned in his diary. He wrote in his diary that, some superpower was saving him repeatedly for a deed of a great significance, which eventually happened in May 1999.

On 04 March 1999, he visited ‘India Gate’ while on leave, with one of my other brothers and told him that one day his name would adorn the war memorial wall, which too came true. He was martyred on 17 May 1999 while battling heroically against the enemy and saving the lives of his fellow comrades. However his body could only be recovered 56 days after his martyrdom and he arrived home on 15 July 1999 wrapped in the Tri-color.

Our family runs a trust ” Shaheed Amit Bhardwaj Memorial Charitable Trust” in his honour and he continues to live with all of us through the Memorial Trust’s various charitable activities.

Amit, my brother, you have gone, but your sacrifice, compassion and love for the country would continue to inspire millions of Indians.