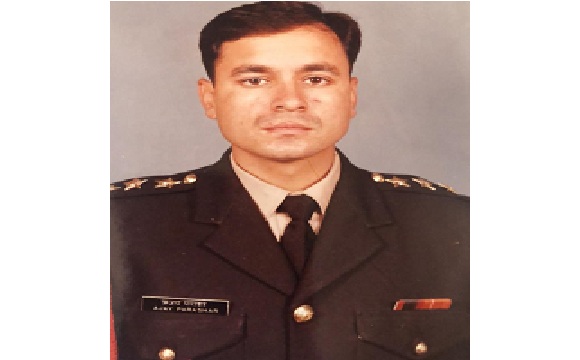 Capt Ajay Parashar was born on 21 September 1971 in Lucknow in Uttar Pradesh. Son of late army veteran Col TR Parashar and Smt Ramesh Kumari Parashar, Capt Ajay had two sisters Anju and Mamta as his siblings. Inspired by his father, who served in the Army, Capt Ajay nursed the idea of donning the olive green right from his younger days. He got selected for the National Defence Academy and joined in January 1990 at the age of 18 years.

He joined the 83rd course, donning the Cheetah or Charlie squadron colours and represented the squadron in multiple sports. Popular with seniors, peers and juniors he passed out as a Divisional Cadet Captain in December 1993. Later he went to IMA  Dehradun and got commissioned into the Army Service Corps in December 1994. After the commissioning as his first assignment, Capt Ajay did his attachment with the Bihar Regiment in the North East, where his exemplary performance with the battalion in counterinsurgency operations earned him accolades.

Subsequently, Capt Ajay underwent Young Officer’s course at the ASC Centre and College, where he was awarded the Commandant’s medal for excellence. Later while posted with an ASC Bn in Udhampur, Capt Ajay‘s go-getter attitude, inherent enthusiasm and exemplary level of motivation drove him to volunteer for the special forces. Consequently, in March 1998, Capt Ajay joined the 'Special Group' after clearing probation with flying colours and earning the coveted ‘maroon beret’. The 'Special Group' was considered to be composed of the most elite soldiers of Indian Army and its responsibilities included conducting daredevil operations entailing high risk. He then underwent his paratrooper training in Apr 1998 and earned his ‘Para wings’.

Capt Ajay was the Second in Command of Charlie team when it got inducted into the militancy hotbed of Doda in November 1998. In the following period, Capt Ajay and his comrades undertook relentless operations against the terrorists that resulted in commendable operational results. Capt Ajay's team launched multiple special operations in the mountains surrounding Doda and he always led them from the front. He led one more such operation on 05 Mar 1999.

On 05 Mar 1999, the team operating base of Capt Ajay came under attack by a group of heavily armed terrorists. Capt Ajay rising to the occasion, swung into action and launched counter attack along with his troops. Displaying extraordinary leadership and courage, Capt Ajay quickly redeployed the troops and charged at the terrorists. However during the heavy exchange of fire, Capt Ajay got severely injured but continued to lead the operation. He later succumbed to his injuries and was martyred. Capt Ajay Parashar was a gritty and committed officer, who led his men from the front and laid down his life, following the highest traditions of the Indian army.