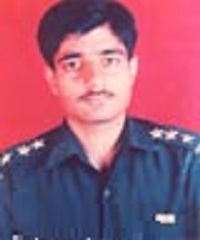 Place of Birth : Lucknow dist (UP)

Captain Aditya Mishra hailed from Lucknow district of Uttar Pradesh and was born on 24th December 1974. Son of Colonel GS Mishra(Retd) and Smt Veena Mishra, Capt Aditya, was very adventurous by nature and always nursed the idea of joining the Armed Forces. He continued to follow his dream and eventually joined the Indian army in the year 1996 at the age of 22 years. He was commissioned into the corps of Signals, the arm of Indian Army that provides communications during war as well as peace.

During July 1999, Capt Aditya Mishra was deployed in Batalik sector in Kargil district of J & K. As the Kargil War was going on during that period, various units were engaged in operations that required constant movement of troops. The communication was very critical and had to keep pace with the ongoing operations. Capt Aditya Mishra was responsible for establishing secured communication lines between the front line troops and the controlling headquarters. On 25 July 1999, Capt Mishra was assigned the task of laying communication lines at a post in Batalik sector.

The post was located at a height of more than 15,000 feet and had a steep gradient. Capt Mishra and his troops had to crawl on rocky terrain to reach the designated place. Capt Mishra succeeded in establishing the required communication links but had to face fire from enemy soldiers who were watching their movements. Capt Mishra and his men retaliated befittingly but suffered casualties during the process. Capt Mishra too got seriously injured during the exchange of fire. He later succumbed to his injuries and was martyred. Capt Aditya Mishra was a valiant soldier and a determined officer who led his men from the front. He showed courage, grit, commitment and camaraderie of a very high order and laid down his life in the service of the nation.