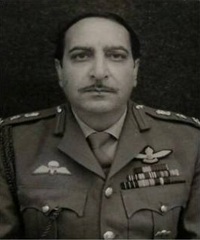 Brig Sarvjit Singh was born on 17th Jun 1932 in Kulu, Himachal Pradesh. After completing his studies he joined Indian Army and was commissioned into 155 Med regiment of the Regiment of Artillery.

During 15th to 23rd September 1965, Brigadier Sarvjit Singh ,who was a Major at that time , was deployed to perform the duties of Air observation in Lahore Sector. Air offensive during the war is an essential element to make enemy weak on ground so that army troops can defeat them without much attrition. Therefore, it is paramount that exact information of  enemy concentration, their probable route, their equipment/supply be known so that effective air offensive can be launched to destroy them.  In order to  gain this vital information for directing  accurate fire on Pakistani tank concentration, bridges and crossing sites over the Ichhogil canal,  Major Sarvjit  undertook number of fights over the enemy territory. With great courage he carried out the dangerous operations in an unarmed aircraft.

Based on the information acquired during his reconnaissance sorties, the IAF aircraft destroyed an important enemy bridge and cut off the enemy armour exit route. Major Singh was instrumental  for  the destruction of all the five enemy tanks and several vehicles deployed in that area. On numerous occasions, while flying low, he was fired upon by the enemy medium Machine Guns. In one occasion, on 17th September 1965, he was attacked by the three enemy F-86 Fighter but he maintained his composure and came back unscathed. His performance and willingness to face the risks was exemplary and inspired his men.

He was given the nation’s third highest gallantry award “Vir Chakra” for his outstanding courage, grit and devotion to duty. Later, he rose to the rank of a Brigadier and retired from the Army in 1986 . He died of natural causes and left for his heavenly abode in 1991, at the Army hospital in New Delhi.

The Citation of Vir Chakra awarded to him reads :

Major Sarvjit Singh Ratra performed the duties of air observation post in the Lahore Sector from 15th to the 23 rd September 1965. In order to gain vital information and to direct accurate fire on the Pakistani tank concentrations, bridges and crossing sites over the Ichhogil canal, he had to undertake a number of flights over enemy picquets. With great courage, he carried out these extremely dangerous missions in an unarmed aircraft. Based on this information, our aircrafts destroyed an important enemy bridge and thus cutoff the enemy’s exit route. He was responsible for the destruction of five enemy tanks and several vehicles, On numerous occasions, while flying low, he was fired upon by the enemy medium Machine Guns. On the 17th September, 1965 he was attacked by three enemy F-86 fighters but he kept his composure and came back safely. His daring performance and willingness to face grave risks were a shining example to all his men.