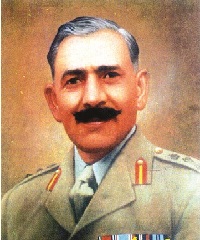 Brigadier Rajinder Singh was born on 14th June 1899 in Bagoona village (now re-named as Rajinderpura) of Samba district. After graduation from the Prince of Wales College in 1921, he was commissioned in the J&K State Force in June 1921. He became Brigadier in May 1942, commanded Jammu Brigade, Kashmir Brigade and took over as Chief of Staff J&K State Force from Maj Gen HL Scot on Sep 24, 1947. His father was Subedar Lakha Singh, who also served his motherland.

On 21st October 1947, the Jammu & Kashmir State Forces were ordered to fight and push back thousands of Pakistani raiders all along its borders. The small troop with limited ammunitions sans any road communication, they fought the raiders tenaciously. Kohla-Domel garrison fell to the invaders the following day. Brigadier Singh, the Chief of Military Staff, lead a column to fight the invaders. Maharaja Hari Singh, meanwhile, ordered a further troop of 100 to assist Brigadier Singh. He had to hold off the raiders till help came after 4 days. He defended and saved the Uri-Rampur sector with the help of the Indian Army, but not without sacrificing his life in the process.

On 21 October 1947, Pakistani forces besieged Jammu and Kashmir after Maharaja Hari Singh declared independence. They tried to take control of the region by force, hoping that the dominant Muslim community would support them. They entered Kashmir via Baramulla and targeted the Sikh and Kashmiri pandits, committing rape, murder and arson in a bid to ‘purge’ the land.

Under siege, on 22 October 1947, Maharaja Hari Singh ordered Brigadier Singh, who served as the chief of army staff of Jammu and Kashmir, to defend the state “till the last man and the last bullet”. Maharaja Hari Singh’s son, Dr Karan Singh, in an interview, remembers the day the order was given. “It was a worrying situation,” he says. “Brig Rajinder Singh was given an order by my father and he just saluted and walked away.”

Brigadier Singh was asked to collect as many men and officers from the Badamibagh cantonment and proceed immediately towards Uri. He could collect only about 150 men with their obsolete weapons. Since there was shortage of petrol (Pakistan had blocked all supplies to Kashmir) and no vehicle was readily available, Brigadier Singh and his men used private transport (buses and trucks) and left Srinagar at 6.30 p.m. The rain, slippery roads and old vehicles slowed their movement. The group reached Uri at 2 am on October 23, 1947. Leaving a platoon at Uri nullah, he proceeded to Garhi.

At Garhi a fierce battle was fought. In the first phase, heavy casualties were inflicted on the enemy. By virtue of their numbers and far superior weapons, the enemy ultimately had the upper hand. The Brigadier realised that to halt the invading raiders, it would be better to withdraw to Uri and hold a defensive position. The raiders, however, entered the settlement and committed atrocities on the inhabitants, not even sparing children and the womenfolk. The small defensive force could hardly come to the rescue of the helpless people. The Brigadier went to Baramulla to communicate the happenings to his HQ and asked for supplementary support in terms of men and material. Brigadier Faquir Singh at the HQ promised to send 70-80 men.

In the capital, the ruler finding the situation getting out of hand took over command of the Army Head Quarters at Srinagar. He sent a written army order to Brigadier Rajinder Singh through Capt Jwala Singh on October 23, 1947.

Captain Jwala Singh reached Uri at 3 am on October 24 with a small contingent of reinforcement and handed over the Maharaja’s army order to Brigadier Rajinder Singh. Finding the situation quite precarious and the defending force quite small in comparison to the swarming tribals, the Brigadier ordered Capt Nasib Singh to blow up the steep girder bridge over the Uri stream. This act led to a wide yawning gap on the far side of the bridge, sufficient to halt the march of the enemy for quite some time. Firing ensued from both banks. The enemy suffered heavy casualties and fell back. After about a couple of hours, the enemy launched another massive attack and the tribal raiders seemed to be everywhere. The defensive force fell back to Mahura for another defensive position. The Brigadier and his men reached Mahura at 10 pm.

The enemy resumed attack at 7 am on October 25. The defense was so effective that the raiders sent some columns to cross the Jhelum upstream on footbridges to attack the defense from the rear. Rajinder Singh, sensing the move, asked Capt Jwala Singh to move upstream and blow up the bridges. The task was completed by 4.30 p.m. but by then some enemy troops had already crossed over to this side. Again the Brigadier moved to Rampur to put up a defence near the Pathar ruins. Trenches were hastily dug and the troops could not rest throughout the night as they had to dig waist deep bunkers.

On 26th morning the enemy firing started from all sides. The defence was, once again, so effective that throughout the day raiders could not launch an assault. Then they planned to put up roadblocks to block even the tactical retreat. The Brigadier, at dusk, ordered a withdrawal to Seri bridge just west of Baramulla to put another halt to the enemy move.

As Brigadier Singh and his men fought, on 26 October, Maharaja Hari Singh signed the Instrument of Accession joining the Union of India as the region was under siege from Pakistani forces.

Retreating vehicles moved at 1 am on October 27 and enemy fire again started from all sides. The first roadblock was cleared without any loss but at the second one near Dewan Mandir (Buniyar), the leading driver was hit and killed. The convoy halted. When Capt Jwala Singh got down to clear the block, he found that the drivers of the first three vehicles had been killed. Somehow he managed to get these three vehicles pushed aside and made four vehicles move on but the Brigadier was in none of them and Captain decided to retreat to Baramulla. In fact at the second road block the Brigadiers’ driver had been killed and then Rajinder Singh himself took control of the steering of his vehicle which was number two in the small convoy. In no time he was also mortally wounded in the right leg from the MMG fire, thus impeding the plan. He “forcefully ordered” his men to put him under the culvert with a revolver since he had promised his ruler that the enemy would advance only over his dead body and ordered them to swiftly and safely move to the planned defensive position to check the movement of the enemy towards Srinagar. Thereafter nothing more was heard of this brave and fearless soldier who always placed duty and country before self. It was at about 2 am on October 27, 1947, that he lay down his life, so that the coming generations could enjoy the fruits of freedom.

For the people of Jammu, Brigadier Singh is known as the ‘Immortal Dogra’ and the ‘Saviour of Kashmir’. He hailed from the Duggar or the Dogra people of Jammu, a community deeply entrenched in the armed forces of India for several generations. He continues to be an inspiration for people across Jammu, and almost every household has one or two members serving in the armed forces, many defending the border and the Kashmir valley.

Brigadier Rajinder Singh was the first recipient of Maha Vir Chakra in independent India, when he was awarded the honor posthumously by the then Army Chief Field Marshall K.M. Carriappa on 30th December 1949.

Immediately after the partition of the Indian Sub continent in 1947, thousands of raiders assisted by Pakistani regulars invaded the State of Jammu & Kashmir all along its border. The Jammu & Kashmir State Forces, stretched along a 550-mile long border deployed in penn-packets with limited arms, ammunition and supplies, without road communications, and heavily-outnumbered, fought tenaciously holding on to their positions. Kohla-Domel garrison fell to the invaders on 22 October 1947. The fate of the Valley as of the whole State hung precariously on a slender thread.

“Brigadier Rajinder Singh is commanded to hold the enemy at Uri at all costs and to the last man. Reinforcement is sent with Capt Jwala Singh ……. “

Brigadier Rajinder Singh and his band of soldiers carried out the orders of the Maharaja to the letter and spirit. Fighting bravely for every inch of land, they delayed enemy advance by two crucial days during which important decisions were taken. The Indian Army joined the fight and the J &K State was thus saved for India by Brigadier Rajinder Singh. He made the supreme sacrifice of his life on the night of 26-27 October 1947 valiantly fighting the Pakistani raiders in Uri-Rampur sector

“Dr Karan Singh, son of erstwhile ruler of Jammu and Kashmir, made the following statements in an interview.

” It was a very worrying situation. We were under attack. Rajinder Singh was given the order by my father and he just saluted and walked away”

” If Rajinder Singh had not stopped the Pakistani invaders, if he didn’t sacrifice his life, Kashmir may not have been a part of India”