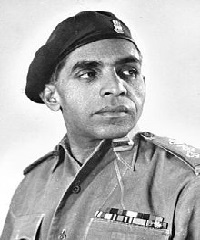 Place of Birth: Bibipur (UP)

Brigadier Mohammad Usman was born on July 15, 1912, in Bibipur in the Mau district of present-day Uttar Pradesh. Son of a police officer Mr Mohammad Farooq Khunambir and Mrs Jamilun Bibi, Brig Usman had three elder sisters, and two brothers, one of whom, Gufran, joined the Army, and also rose to the rank of a brigadier. Courage came to Brig Usman at a young age, when at the age of 12, he jumped into a well to save a drowning child. His father wanted him to join the civil services, but he was destined to don the military uniform and joined the Army.

Indians had begun to join the Army as commissioned officers since 1920, though the competition was very tough, and only the scions of the aristocracy or landed gentry were given preference. Though Brig Usman did not belong to the preferred class, he applied for Sandhurst and got selected, and in July 1932, sailed for England. In fact, this was the last course at Sandhurst to which Indians were admitted since subsequent batches joined the Indian Military Academy, which opened in Dehradun in the same year. Brig Usman passed out from Sandhurst on 01 February 1934, along with ten other Indians.

On 19 March 1935, as a young officer he was appointed to the Indian Army and posted to the 5th battalion of the 10th Baluch Regiment (5/10 Baluch). He was promoted to the rank of Lieutenant on 30 April 1936 and Captain on 31 August 1941. In April 1944, he served in Burma and was mentioned in dispatches as an acting Major in the London Gazette of 27 September 1945. He commanded the 14th battalion of the 10th Baluch Regiment (14/10 Baluch) from April 1945 to April 1946. During the partition of India, Brig Usman, being a Muslim officer in the Baluch Regiment, was under intense pressure from the Pakistani leadership to opt for the Pakistan Army. However, despite the fact he was promised a future position as the Pakistan Army Chief, he was unconvinced. When the Baluch Regiment was allotted to Pakistan, Brig Usman was transferred to the Dogra Regiment.

In 1947 Pakistan sent tribal irregulars into the princely state of Jammu and Kashmir in an attempt to capture it and accede it to Pakistan. Brig Mohammad Usman, then commanding the 77th Parachute Brigade, was sent to command the 50th Parachute Brigade, which was deployed at Jhangar in December 1947.  On 25 December 1947, with the odds stacked heavily against the brigade, Pakistani forces captured Jhangar. Located at the junction of roads coming from Mirpur and Kotli, Jhangar was of strategic importance. On that day Brig Usman took a vow to recapture Jhangar a feat he accomplished three months later, but at the cost of his own life.

In January–February 1948 Brig Usman repulsed fierce attacks on Nowshera and Jhangar, both highly strategic locations in Jammu and Kashmir. During the defence of Nowshera against overwhelming odds and numbers, Indian forces inflicted around 2000 casualties on the Pakistanis (about 1000 dead and 1000 wounded) while Indian forces suffered only 33 dead and 102 wounded. His defence earned him the nickname Lion of Nowshera. Pakistani forces then announced a sum of Rs 50,000 as a prize for his head. Unaffected by praise and congratulations, Brig Usman continued to sleep on a mat laid on the floor as he had vowed that he would not sleep on a bed till he recaptured Jhangar, from where he had had to withdraw in late 1947.

The then Lieutenant General K M Cariappa (later General and Chief of Army Staff and years after retirement made Field Marshal), who had taken over as Western Army Commander, brought his tactical headquarters forward to Jammu to oversee the conduct of two important operations, namely the capture of Jhangar and Poonch. The operations commenced in the last week of February 1948. The 19th Infantry Brigade advanced along the northern ridge, while the 50th Parachute Brigade cleared the hills dominating the Nowshera-Jhangar road in the south.

The enemy was eventually driven from the area, and Jhangar was recaptured. Pakistan brought its regular forces into the fray in May 1948. Jhangar was once again subjected to heavy artillery bombardment, and many determined attacks were launched on Jhangar by the Pakistan Army. However, Brig Usman frustrated all their attempts to recapture it. It was during this defence of Jhangar that Brig Usman was killed on July 3, 1948, by an enemy 25-pounder shell. He was 12 days short of his 36th birthday. His last words were “I am dying but let not the territory we were fighting for fall for the enemy”. For his inspiring leadership and great courage, he was awarded the “Maha Vir Chakra” posthumously.

Serving with the Dogras in Burma, he had turned into a vegetarian. He exhorted his men to keep a fast on Tuesdays so that the food could be distributed to the villagers. A bachelor, a bulk of his salary would be spent in providing education to poor children. He was religious yet a staunch loyalist. On receiving reports that 50000 tribal marauders had taken refuge at a mosque near Naushera and that our troops were hesitant in firing at the religious structure, he reached there personally and ordered fire to be opened, stating that the place no longer remained religious as it had been occupied by marauders. Brigadier Mohammed Usman remains one of the greatest soldiers and an inspiring military leader India has ever produced.

Brigadier Usman signed an order to the “Comrades of 50 (I) Para Brigade”. It read:

“Time’s come for the capture of Jhangar. It is not an easy task, but I’ve complete faith in you all to do your best to recapture the lost ground and retrieve the honour of our arms—we must not falter, we must not fail. Forward friends, fearless we go to Jhangar. India expects everyone to do his duty. Jai Hind.”