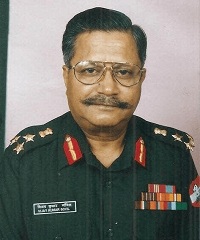 Brig Vijay Kumar Govil was commissioned into the Corps of EME. By the year 2003, he had risen to the rank of a Brigadier and had served in various opertaional areas with challenging work environments.

During 2003, Brig Vijay Kumar Govil was serving with HQs 16 Corps as Deputy Director EME. The Head Quarters was located in Nagrota between Jammu & Udhampur. On 22nd Jul 2003, at around 5 am a group of heavily armed militants attacked an army camp at Tanda in Akhnoor area near Jammu. Three militants disguised in army uniform managed to enter the closely guarded Head Quarters of 610 Field EME Battalion and fired indiscriminately. During the firing, a total of seven soldiers were martyred and 14 others got injured. In the ensuing gun battle with the troops, two militants were neutralized. Brig Govil decided to rush to the site to assess the situation and take appropriate military measures. The situation was still volatile and entailed risk as the number of attackers was not fully known. However, Brig Govil without caring for his own safety was determined to go to the site. He also convinced other senior commanders to visit the site to take stock of the situation.

Though as per the available information, the attackers had been neutralized, the third militant was still hiding within the camp. As Brig Govil and other senior commanders including Army Commander Lt Gen Hari Prasad, the GoC 16 Corps Lt Gen T.P. S. Brar, Maj Gen K.K. Khanna, and Maj Gen T.K. Sapru reached the site, the third militant blew himself up. The blast had devastating effects seriously injuring Brig Govil and some other officers. However, Brig Govil succumbed to his injuries and was martyred. Brig Vijay Kumar Govil was a committed soldier and an officer par excellence, who laid down his life following the highest traditions of the Indian army.