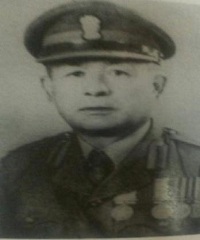 Brigadier Sher Jung Thapa was born in Abbottabad, Pakistan on 18 June 1908. While his grandfather, Subedar Balkrishna Khundrung Thapa Magar (2/5 GR), had moved  and settled in India , the ancestral home was at Tapke Gaun, Gorkha District, Nepal. Sher Jung’s father Arjun Thapa (2/5 GR) was an Honorary Captain  and was a World War II veteran.

Brigadier Sher Jung Thapa graduated from Government Post Graduate College, Dharamshala. He was known as an excellent hockey player in college and had played  frequently with stalwarts of 1 Gorkha Rifles, Regimental Centre, Dharamsala. In the hockey field, he became a close friend of Captain Douglas Gracy, Adjutant of 1 GR RC, who encouraged Thapa to join the forces of Jammu & Kashmir state as an officer. Thapa took his advice and was commissioned on 01 September 1932. Brigadier Sher Jung Thapa was married to Dhan Shobha Thapa. The couple had eight children.

Brigadier Sher Jung Thapa held the rank of major in the Jammu and Kashmir State Forces at the time of the princely state’s accession to India in October 1947. As part of the 6th Infantry Battalion, Thapa was stationed in Leh in Ladakh area. His commanding officer, Col. Abdul Majid was based at Bunji in the Gilgit wazarat, which had been returned to the princely state by the departing British administration. On 30 October, Col. Majid went to Gilgit along with forces to support Governor Ghansara Singh, who was apprehensive of the loyalty of the British-officered Gilgit Scouts based there. Unfortunately, the officers of the regiment mutinied under the leadership of Captain Mirza Hassan Khan  and joined the Gilgit Scouts. Governor Ghansara Singh was arrested and Col. Majid was also taken prisoner. Most of the loyal soldiers were massacred while few could manage to escape to Ladakh wazrat.

Skardu was the tehsil  headquarters of Baltistan, which also doubled as the district headquarters of the Ladakh wazarat for six months in a year. It was a key post between Gilgit and Leh and the Indian Army considered it essential to hold the Skardu garrison for the defense of Leh.

Sher Jung Thapa was ordered to take charge of the remaining 6th Infantry at Skardu, and was promoted to lieutenant colonel. He left Leh on 23 November and reached Skardu by 2 December, walking through heavy snowfall. This gave him enough time to make preparations for the defence of Skardu before the impending attack. Meanwhile, the Pakistani commander at Gilgit reorganised the Gilgit Scouts and the 6th Infantry rebels into three forces of 400 men each. The “Ibex Force”, one among the three, commanded by Major Ehsan Ali, was tasked with capturing Skardu. Thapa deployed two forward posts near the Tsari pass thirty miles away. However, Captain Nek Alam, commanding one of the platoons, joined the rebels and the other platoon got massacred. On 11 February 1948, the attack commenced on Skardu. For over six months from February to August. Thapa withstood the attack, housed in the garrison with dwindling ammunition and food. Reinforcements by ground were ambushed en route and reinforcements by air were considered infeasible due to the high mountains and uncertain weather conditions. Attempts were made to air drop supplies, but the drops often landed outside the garrison. Eventually, on 14 August, Thapa succumbed to the invaders, having exhausted all supplies.

Then Lt Col Thapa was a Prisoner of War (PoW) in Pakistan and General Sir Douglas Gracy was the Commander-in-Chief of the Pakistan Army. Lieutenant Colonel Thapa’s earlier association with General Gracy came to his rescue otherwise he would have met the fate of other prisoners of war who were killed by the Pakistani Army. He was lucku enough to be repatriated after the war ended. All the other men in the garrison were apparently killed.

Brigadier Sher Jung Thapa bought an English bunglow in Mcleodganj, and spent his last years there. Brigadier Thapa was a person of commitments and service. He was one of the first families in the hilly town of Dharamshala to own a car. His mighty blue Ambassador would always catch attention of the passers-by.

Brigadier Sher Jung Thapal, after leading a fulfilling  92 years of life, breathed his last  on  25th Feb 1999 at Army Hospital, New Delhi due to old age.

Brigadier Thapa is survived by his children.

The Citation for the  Maha Vir Chakra reads him to :

In August 1947 at the time of invasion of J & K by Pak raiders, the entire northern frontier of Jammu and Kashmir State from Bunji to Leh, approximately 200 miles (excluding Gilgit Agency) was manned by the 6th Battalion. After the fall of Bunji in early November 1947, the 6th Battalion was ordered to move to Skardu with as many troops as possible.
On 11 February 1948, Skardu was attacked and surrounded by the enemy of approximately 600 strong strength. The enemy was routed under the determined leadership of Lieutenant Colonel Sher Jung Thapa. Unable to capture the fort, the enemy laid to seige to the fort, which continued for six months. Despite dwindling rations, ammunition, shortage of water, lack of medicines, heavy casualties and other overwhelming odds, the enemy attempts to capture the fort were thwarted every time under the dynamic and inspiring leadership of Lieutenant Colonel Sher Jung Thapa. After going through the siege for long and when not help of any kind could be given from outside, Lieutenant Colonel Sher Jung Thapa was asked by Maj Gen K S Thimayya, DSO, GOC 19 Infantry Division to surrender which he stoutly opposed and continued to hold on the fort steadfastly without any regard to his personal safety.
On the fateful day of 14 Aug 1948, the gallant survivors of the 6th, utterly exhausted and on the verge of starvation, out-numbered to 5 to 1, without ammunition, rations and any hope of succour from outside, had no alternative but to capitulate. Thus ended the heroic seige of Skardu which had kept a superior enemy at bay for six months and three days. For this gallant action, Lieutenant Colonel later Brigadier Sher Jung Thapa was awarded MVC.