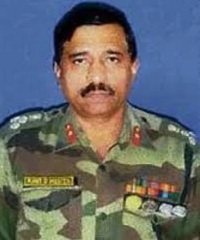 Brig Ravi Datt Mehta, hailed from Shimla, Himachal Pradesh and was born in a family known for its tradition of military service. Son of Shri SD Mehta and Smt Sunita Mehta, he grew up nursing the idea of following his family tradition and donning the military uniform one day. He did his initial schooling from St Edward’s School, Shimla, and continued to follow his dream. Consequently he got selected to join the prestigious National Defence Academy, Khadakwasla. He was commissioned in June 1976 in Air Defence Artillery and later joined the Corps of Military Intelligence in 1982.

Since his childhood days, Brig Mehta had keen interest in the subject of mathematics and was known as a math wizard among his friends and family. Besides being academically sound, he had special interest in music and different languages. He was known to have proficiency in many languages including Pashto, mandarin, and Tibetan. By nature, he was affable, fun-loving and enthusiastic person, full of life. After serving for few years, he got married to Ms Sunita and the couple had a son Udit and daughter Bhavya.

During his illustrious career, Brig RD Mehta had a wide range of experience in command and staff. Besides commanding an Intelligence and Field Security Unit in the Eastern Sector, he held sensitive Intelligence Staff appointments at Army HQ and formations, including that of Brigadier General Staff (Intelligence) of Northern Command. He had the distinction of attending all the important career courses that included Defence Services Staff College and Higher Command Course and National Defence College. For his professionalism, hard work and dedication, Brig RD Mehta was awarded two Chief of Army Staff(COAS) and two GOC-in-C commendation cards. Brig RD Mehta assumed the appointment of Defence Attache and Military Advisor at the Indian Embassy, Kabul (Afghanistan) on 09 February 2008.

During 2008, Brig Ravi Datt Mehta was serving as a Defence Attaché in Kabul, a war-torn area infested with terrorist activities. Despite potential threat to his life, Brig Mehta diligently worked on further deepening the relations between Afghanistan and India. He played a key role in training the Afghan military and was involved in closely tracking links between the Taliban and Pakistan’s inter-service intelligence (ISI) among other things.

Being responsible for the security arrangements, Brig Mehta had received inputs on possible suicide attacks by terrorists on the Indian embassy by employing explosive-laden vehicles. In view of this, Brig Mehta used to regularly review the security arrangements before commencing his daily duties. On 7th July 2008, Brig Mehta did his routine check on the security of the Indian embassy, when he possibly sensed the threat lurking around the corner and sprang into action. Around 8:30 AM local time, a Toyota Camry driven by a suicide bomber rammed into his car near the gates of the Indian embassy killing 41 and injuring 139 others. Unmindful of personal safety, while following strict security check drills and acting beyond the call of his duty, he ensured that the grand design of the terrorists to blow up the complete embassy building did not succeed. However during this process he laid down his life while averting colossal destruction of the lives and assets of the nation.

The citation for the Kirti Chakra awarded to him-

Brigadier Ravi Datt Mehta, in a short span of five months in the appointment of Defence Attaché, Embassy of India in Kabul, Afghanistan, contributed immensely towards enhancing historic and progressive Indo-Afghan relations. In a declared war-torn area infested with terrorism and unmindful of threats to his life, he had relentlessly worked to generate intense cooperation with the Afghan Army, security agencies as well as the local population, very often by personal visits to dangerous far-flung areas. His gallant actions in this sensitive neighborhood helped in furthering national interests.

Being responsible for the security arrangements, the officer had received inputs on possible suicide attacks by terrorists on the Indian embassy by employing explosive-laden vehicles. Against this backdrop, on his way to the embassy, as a routine, the officer used to review the security arrangements before commencing his daily duties. On 7 July 2008, it was possibly this routine drill that resulted in the crashing of the explosive-laden terrorist’s vehicle into his car causing the explosion at the embassy’s gate itself instead of the main building, which would have proved disastrous. Unmindful of personal safety, while following strict security check drills and acting beyond the call of his duty, he ensured that the grand design of the terrorists to blow up the complete embassy building did not succeed. In the process, while he laid down his life, he averted colossal destruction of the lives and assets of the nation.

Brigadier Ravi Datt Mehta displayed gallantry, selfless service beyond the call of his duties, and laid down his life in the highest tradition.