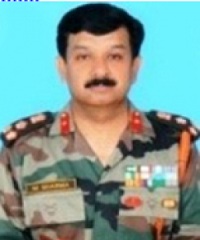 Brigadier Manuhar Sharma was born on 23rd November 1968 in Meerut district of Uttar Pradesh. Brig Sharma was commissioned to 3 Sikh Light Infantry(Royal XXXIV) on 16th December 1989. He was a thorough professional, dynamic leader, very soft-spoken and lively person.  He was commanding 118 Infantry Brigade in Neemu in the Ladakh area during 2017.

Known for his bravery and compassionate values Brig Sharma died of a cardiac arrest on 11 April 2017 while on duty. He left for his heavenly abode serving the nation till last breath leaving a vacuum not only for his family but the entire ‘Royal Chauntis’ fraternity.