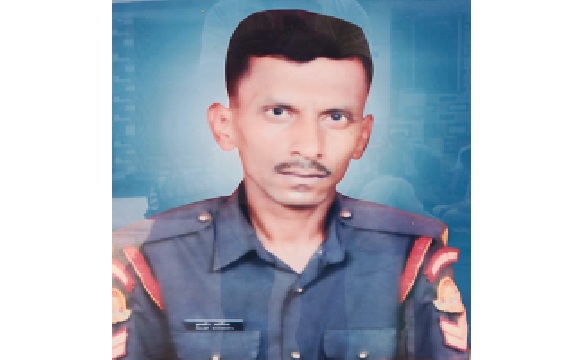 Havaldar Bhadouria Kuldip Suresh Singh hailed from Ahmedabad district in Guajrat and was born on 28th Jun 1981. Son of late Shri Suresh Singh, Hav Bhadouria had a brother Sandeep Singh as his sibling. After completing his school education, he joined the army on 25th Sep 2000 at the age of 19 years. He was recruited into the 12 Guards Battalion of the Brigade of Guards, an infantry Regiment known for its brave soldiers and numerous battle honours

After serving for few years, he got married and the couple had a son and a daughter,. By the year 2021, he had put in over 20 years of service and had been promoted to the rank of Havaldar. By that time he had served in various challenging operational areas and developed into a dedicated soldier. By that time he had served from the scorching deserts of Rajasthan to icy heights of Ladakh and gathered substantial experience of working in filed areas. He had served in Rashtriya Rifles battalions too and taken part in various counter-insurgency operations.

During Apr 2021, Hav Bhadouria Kuldip Suresh Singh's unit was deployed in Eastern Ladakh along Line of Actual Control since Aug 2020. Since early June the tension along the LAC was building up due to construction work in Galwan valley close to the road going from Leh to Daulat Beg Oldie. The Chinese had a serious objection to the construction of a bridge across the Galwan river into the Aksai Chin area. The area held strategic importance to India as well as China as it dominated the road from Leh to Daulat Beg Oldie an airstrip of great military significance to India. In June 2020, an altercation during the border talks raised the tempers leading to a scuffle. The scuffle eventually turned into a violent clash with the Chinese soldiers attacking Indian soldiers. The clashes went on for many hours during which many Indian soldiers were martyred. Following the incident many new battalions were inducted into the region to bolster the defence. Hav Bhadouria's unit was one of them.

Hav Bhadouria and other soldiers faced extreme risks in manning the inhospitable terrain at heights exceeding 16000 feet under extreme weather conditions. The medical problems faced by the soldiers at such high altitudes included high altitude pulmonary oedema, acute mountain sickness, frost bite chilblains, hypothermia and snow blindness. However undeterred by these challenges Hav Bhadouria and his comrades carried out their assigned tasks with full commitment and dedication. On 08 April Hav Bhadouria while on an operational assignment, faced acute breathing problem. He was rushed to the nearby medical facility for treatment of Acute Coronary Syndrome, but he eventually lost the battle for life. Hav Bhadouria Kuldip Suresh Singh was a dedicated and valiant soldier who laid down his life in the line of his duty.

Hav Bhadouria Kuldip Suresh Singh is survived by his wife, son and a daughter.