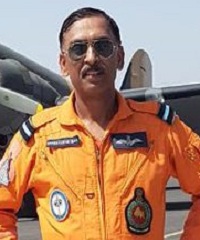 Air Commodore Sanjai Chauhan had joined the IAF in the flying branch and was trained to be a fighter pilot. He had put in over twenty years of service and had served in various Air Force bases in different appointments. He was an experienced pilot and had developed expertise in various air operations during his long service career. He had the experience of flying fighter aircraft of different types and was functioning as Air Officer Commanding of the premier Air Base located at Jamnagar in Gujarat.

During 2018, Air Cmde Sanjai Chauhan was commanding the prestigious Air Force Station at Jamnagar in Gujarat. The Air Force base at Jamnagar is a front line airbase having a fighter squadron of Jaguar aircraft. Jaguar is a multi-role aircraft and was built under license from SEPECAT, an Anglo-French consortium. Over the years, IAF has been upgrading the fleet of jaguars with modern avionics, radar systems, and modern engines, to keep them airworthy and potent fighter machines. Air Cmde Chauhan was an ace fighter pilot who loved his profession of flying and always tried hard to excel in mission-critical air operations. On 05 June 2018, Air Cmde Chauhan was scheduled to undertake an operational training sortie on Jaguar aircraft.

Air Cmde Chauhan carried out the pre-flight checks and took off in his jaguar aircraft on the morning of 05 June 2018 as planned. However, the aircraft developed some unexpected snag immediately after takeoff. The emergency situation developed too sudden and Air Cmde Chauhan did not get enough time to take necessary measures to control the aircraft. Consequently, the aircraft crashed near Beraja-Ramaniya village in Mundra Taluk of Kutch district in Gujarat. Air Cmde Chauhan got wounded badly and later succumbed to his injuries.

Air Commodore Sanjai Chauhan was a highly experienced and professionally competent pilot who laid down his life in the service of the nation, like a true air warrior.