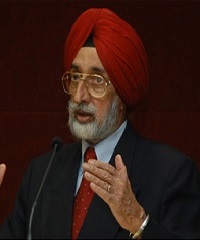 Air Cmde Jasjit Singh started his career in the Air Force in 1956. He flew a variety of fighter jets like Vampires, Mysteres and MiG-21s. He was a very accomplished and experienced fighter pilot. He was posted as a staff officer at Air Force Headquarters just before the 1971 war but he wanted to be part of the operations. He ot an attachment to a frontline unit. He flew in the 1971 Cactus Lily operations with No.3 Squadron at Sirsa. He flew many operational missions over well entrenched and heavily fortified enemy areas. He faced heavy ground opposition from the enemy. He flew the Mystere fighter bomber, which was vulnerable in the skies to ground attacks. He braved all of them and successfully carried out his operations. In the process he led the troops to destroy many enemy tanks in the area. They also destroyed enemy gun positons and bunkers and thus contributed in a big way in the successful 1971 operations. His contributions were recognized and he was awarded the Vir Chakra for his role in the war. He subsequently converted to the MiG-21 and was awarded the Vayu Sena Medal in 1974.

He then worked as the Director of Operations of the Air Force from 1978. He was known as a mater strategist and an astute thinker and with his experience and skills, was deemed as the perfect officer for the job. He was later conferred the Ati Vishisht Seva medal in 1984 for his services in his post. He retired from the Air Force in 1987. He however remained as the head of the Institute for Defense Studies and Analysis. He was the longest continuously serving Director in the IDSC as he served from 1987 to 2001. He gave the institution a strong international profile. He was highly regarded in international strategic circles. He also focused on mentoring and training young researchers. Many of them have gained national and international visibility.

After leaving the IDSA he set up and directed the Centre for Air Power Studies for twelve years. In his new role, not only did he continue with the national security studies but also brought a sharp focus on the changing role of the Indian Air Force, India as a space power and the growing importance of space security in India’s national security. Higher defence organisation remained a passion for him. He had the ability to identify crucial areas for research. He had himself demystified the intricacies of India defence budget. After the 1998 nuclear tests, he along with many others began to focus on nuclear doctrine, nuclear diplomacy, the role of India in a newly emerging world order and national security management. He also worked on energy security issues  when there was very less awareness about it and for a brief period took a special interest in cyber security too. Despite his advancing years, his ability to think out-of-the-box made him a very important figure and successful in every endeavour that he undertook. He wrote many book on military strategy among other things and his ideas have been incorporated by the governments numerous times. As Assistant Director Personnel (Officers) in 1969, he wrote the seminal paper on cadre management in the IAF.  His ideas were partially put into practice in 1976.

His books were insightful and a guiding light for an entire generation of officers in the Air Force and the Indian Government while implementing strategies. He was a master military strategist and was consulted for his counsel on all higher level matters of military strategies. He was a much respected and revered figure in the military strategy space. He was understood to be close to Air Marshal Arjun Singh and  was the authorized biographer of Air Marshal Arjun Singh. He was awarded the Padma Bhushan in 2006 for his lifetime achievements and overall contributions to the country.

He passed away on 04 August 2013 at the age of 79 after suffering a bout of Pneumonia. India had lost an inspirational military leader, a brilliant strategic thinker and a prolific author on military affairs. Tributes poured in from all corners of India and abroad. Having inspired a large number of young researchers, military personnel, diplomats and academics in strategic thinking, Air Cmde Jasjit Singh had a large following. He has been described as a visionary, a leader, a motivator and a nationalist. He remains the most decorated Air Force officer of India.

During the operations against Pakistan in December 1971 Squadron Leader Jasjit Singh flew a number of operational missions over heavily defended enemy areas. In spite of heavy ground opposition, he pressed home his attacks and destroyed a number of enemy tanks, gun positions and bunkers. Throughout the operations, Squadron Leader Jasjit Singh displayed gallantry, determination and devotion to duty of a high order.

He was a very accomplished writer and strategist. he wrote numerous books on military strategies and military affairs and many of his works were incorporated by the defence and the government. He was the authorized writer for the biography on Air Marshal Arjun Singh, called ‘The Icon’. Some of his other works are mentioned here.