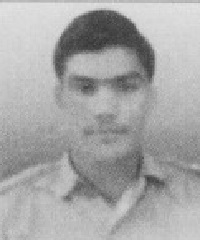 AC1 PS Sharma was enrolled into the IAF in the year 1970 and got trained as a a technician.  After completing his training, he got posted to 220 Squadron based at Air Force Station Uttarlai in Barmer district of Rajasthan, as his first assignment.

During 1971, AC1 PS Sharma was serving with 220 Sqn, known as “Desert Tigers” and was based at Air Force Station Uttarlai in Rajasthan. 220 Squadron was formed at Air Force Station Pune (2 Wing AF) on 9 Jan 63 with Squadron Leader Norman Foster Watts as its first commanding officer. Initially it was located at Palam as 51 Auxillary Air Force (AAF) Squadron and equipped with Vampire aircraft. The squadron was later re-equipped with the 'Indigenous HF-24 Marut' in April 1969. As the war broke out on 03 Dec 1971 with Pakistan, the Squadron undertook various offensive air missions. As Air Force Base at Uttarlai had 220 Sqn and other important Air Force assets, it was also an important target for the enemy Air Force. The PAF carried out one such attack on Air Force Base at Uttarlai on 11 Dec 1971.

As part of the ongoing operations, 220 Sqn was tasked for a number of offensive missions. The technical manpower and other support staff were continuously engaged in preparing aircraft for various missions. On 11 Dec 1971, AC1 PS Sharma  was on tarmac engaged in the given task, when PAF aircraft struck Uttarlai airfield. PAF with F-104 aircraft breaching the Indian air defence reached Barmer and carried out a strafing attack on Uttarlai airfield. AC1 PS Sharma was hit by a ricochet off a blastpen and got seriously injured. Later he succumbed to his injuries and was martyred. AC1 PS Sharma was a young dedicated air warrior, who laid down his life in the line of his duty.